June marks my 1st anniversary following the street art scene in East London. This post, the second of two, continues to document some of the rapid repainting of the Sclater Street wall once the days got longer and summer approached.

Here is a diagram of the wall that shows how its divided and repainted. This post covers areas C and D. 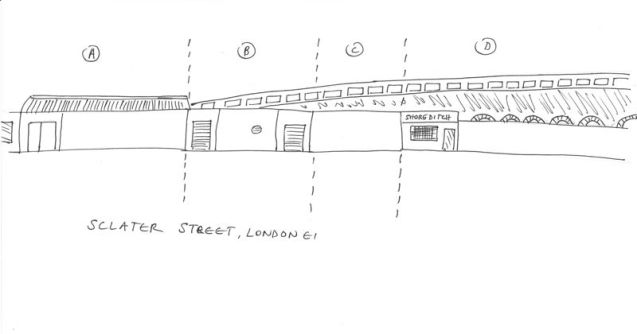 My drawing of Sclater street wall and how the artists divide it for painting.

This section is another very central and prestigious section of the wall.  I would even say it is the section to paint on because of its eye catching position.

Back in February when I was quickly scouting around with my camera I was instantly drawn to this piece by Amara Por Dios.  My best view with the parked car problem.  Also back in February, even if I had thought of returning early on Sunday morning for a better shot, it would have been dark.

Artists: Will Barrass and Tizerone (photographed 09/04/15)

One of the pleasures in following street art is how friendly the artists are. So I was very excited to see that another of my particular favourites, Italian artist Hunto, was working a splendid new work the following week.

Below is the finished worked, snapped early on Sunday morning.  I think its so beautiful. And I’ve not seen those white panels before.

And 4 weeks later when I went by, the Hunto was gone.  Still, a month on this wall was good. This next work only lasted 2 weeks.

Around 28th May, artist Josh Stika painted the blue/green background for a car advert.  I’ve taken this shot standing on a spot marked on pavement opposite by the photographer.  You can see that the wall has been added to by other graffiti artists. 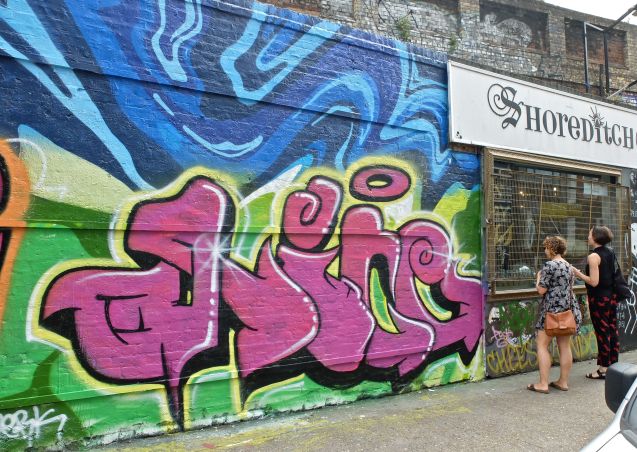 By mid June, I’d decided on my plan for this blog post and I returned on Sunday 14th for some final clear shots of the wall.  And look what I found.  With the paint still wet. And no cars to block my view. 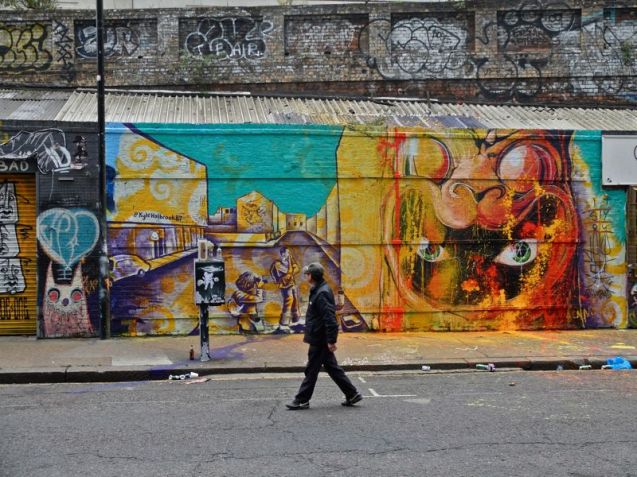 I was so excited to one of the first spotters of this piece.  Kyle Holbrook is over from Miami and the yellow and purple are his trade mark colours.

I love the way he’s captured Sclater street and included people like me, who photograph street art, are in it.  I was also delighted to see Himbad back on this wall after his earlier piece was so short lived.

This section tends to have geometric/graffiti patterns which interest me less. So my documentation is sketchy. Apologies to the artists, I mean no disrespect. 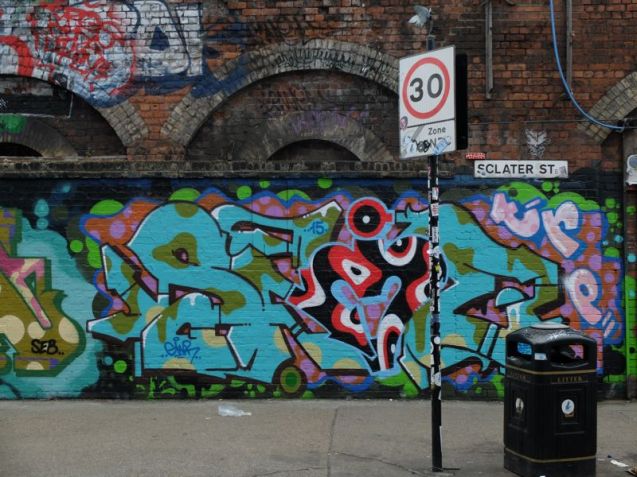 No doubt for those of you able to stroll down Sclater street this weekend, many of these paintings will have been replaced by other exciting works.  The living art walls are flourishing.