June marks my 1st anniversary following the street art scene in East London.  These two posts document some of the rapid repainting of the Sclater Street wall once the days got longer and summer approached. Its a wonderful old Victorian brick wall which runs along the railway viaduct.

The wall is so long that I drew this diagram to show how it gets divided up.

Sclater St, section A: the doors

Walking from the Brick Lane end, this section starts in the middle of Sclater Street. There are two areas to it. A set of doors recessed into the wall and the stretch of wall as far as the shutters to the right

Work and winter weather kept me off the streets at the start of 2015.  I’ve included this earlier photograph from February because the same artists were still there at the beginning of April.

Section A. The door is painted by Six1Six. Figures to left are by Pang. Dog’s head and figures of the door are by Himbad. And one-eyed black creature is a Noriaki.  (photograph 18/02/15) 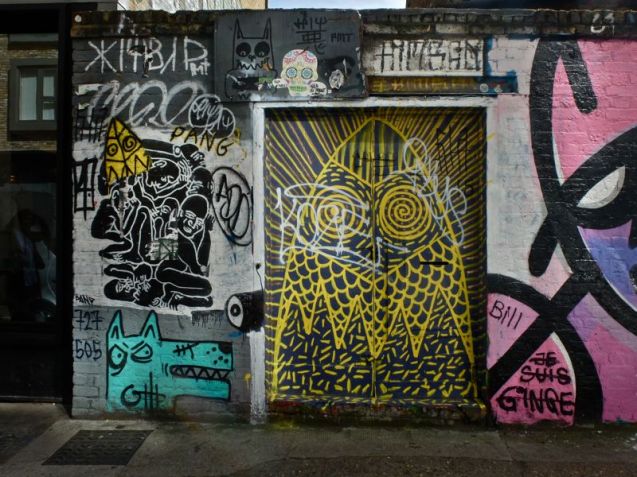 Two months later. Six1Six has redesigned and repainted the doors. And he has kindly touched up the damaged figures by Pang to the left. (photograph 17/04/15)

In early May Colombian artist Stink Fish came to London. He repainted the doors. He also has work on Rivington St remaining. (photograph 17/05/15) 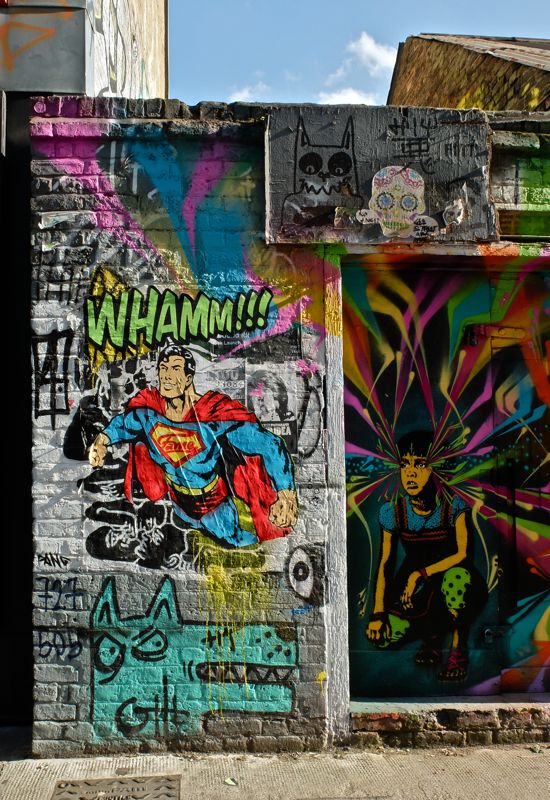 In mid-June this Super man paste-up arrived and it covers the Pang figures. (photographed 19/06/15)

Sclater St, section A: the wall

When I rushed by on that cold February day, I didn’t notice what was on this stretch of wall. So my first record is from April 2015.

During the week, this stretch of road is always full of parked cars. So its a touch ironic that it was impossible for me to see this mural straight on because parked cars were obstructing it.  So  I returned early on a Sunday morning and discovered that the shoe stall was now in the way.  But it also adds a surreal touch to the mural. And notice how clever DK’s use of perspective is, depending on which angle you view it.

Near the end of May, Friday 28th, I saw tweets with pictures of an exciting new work co-ordinated by the artist Himbad.  On the Wednesday, I was able to pop by and see it for myself.  But thanks to the parked cars I could only photograph it in sections.  And thanks also to the wonderful newish London Calling Blog  for helping me credit all the artists accurately. This mural is the first time I’ve seen work by Kazz and Petersaurus. 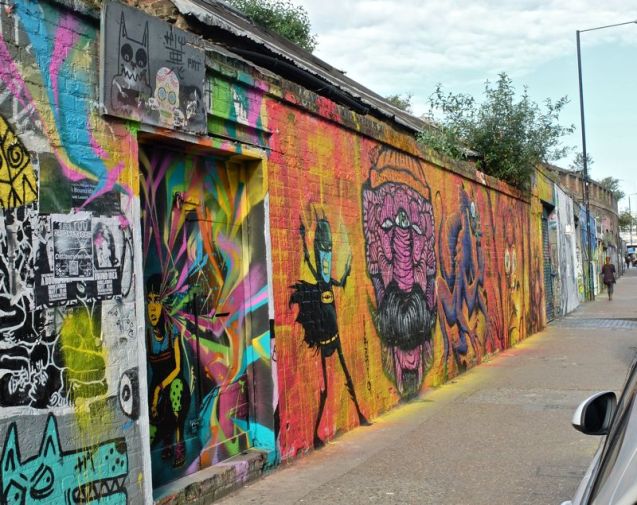 I was looking forward to returning on Sunday morning for a shot of the full work but it was gone 2 days later, Friday 5th June. So the Himbad collaboration was only there for 10 days. Another massive collective work had taken its place. And this has now been there for at least 15 days. 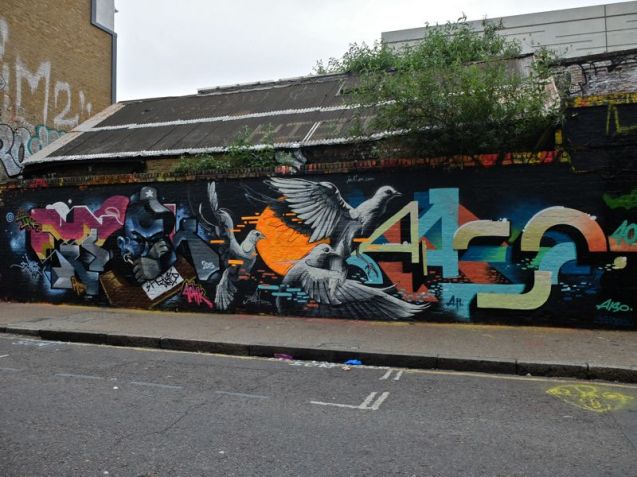 Section B is the section of wall bookended by two single shutters recessed into the wall.  This first shutter must have been painted in April but I didn’t pay close attention to it because I find these abstract designs harder to relate to. I recorded it on Sunday 14th June for this post.

The space between the shutters is much in demand because its so central. And its regularly repainted. 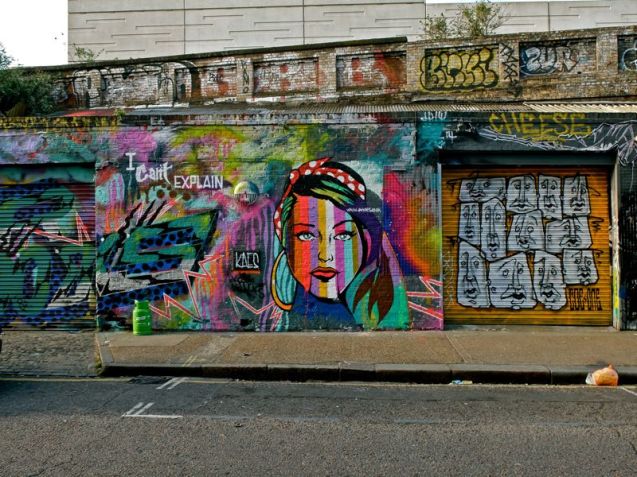 Artist (woman’s face) by Kaes. You can see how the shutter designed was originally painted (photographed 19/04/15) 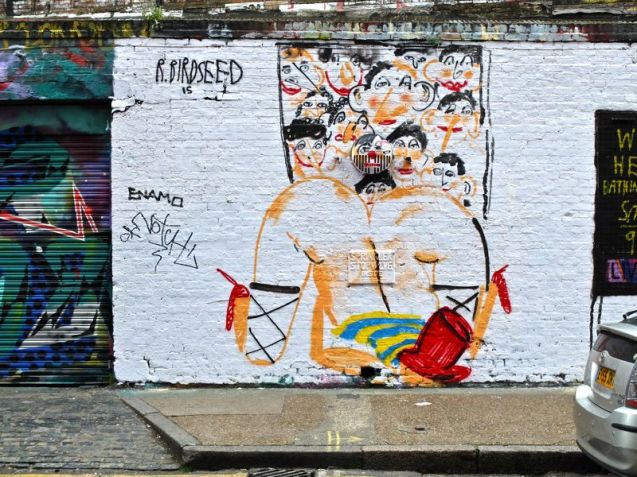 One of Ricky Birdseed’s lewd works that are all over Shoreditch this year. (photographed 08/05/15)

This tribal head (artist unknown) partly covers Ricky Birdseed. Plus some advertising posters which you normally never see. And the 2nd shutter with faces by Coe One  (photographed 17/05/15)

This mural was painted during the 2nd May Bank Holiday weekend. It is this collaboration between Brazilian artist Cranio and 3D artist Fanakapan.

Faces, human or otherwise, always catch my eye. This piece was there back in February (see my part 2 post for a glimpse of it).  And as you can see from the photographs above its still there in mid June. 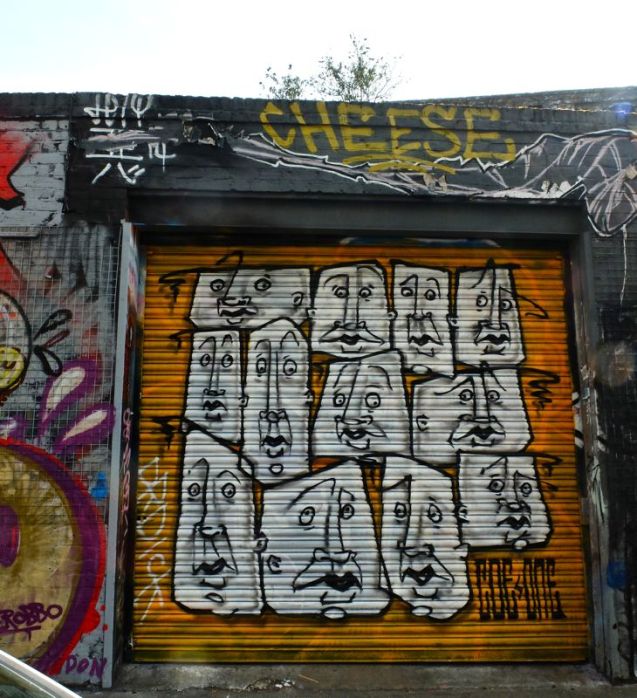 South African artist Coe One has painted this shutter. (photographed 09/04/15)

I hope you continue reading Part2 for sections C and D to see works by Amara Por Dios, Hunto and others. This post was getting too long, so I thought I’d split it.