Last Saturday, 7th May 2016, saw the 3rd annual Femme Fierce paint jam in the Leake Street tunnel.  The session started around 8 am and was due to finish at 5.30pm.  Their facebook page mentioned a DJ and an award ceremony around 4pm and that around 100 artists would be attending.  The word on the street though was that this year’s event would be more low key with many of the artists from the previous two years not attending.  So I popped along around 3pm to see if any one had turned up.

The place was buzzing when I arrived and it appeared busy to my novice eye. Three events were in progress.  The Femme Fierce jam was at each end of the tunnel.  In the middle was a mixed gender graff writers’ jam.  And dotted into spare spots were some London-based male street artists.  And as if that wasn’t enough, someone had organised a photographers’ photoshoot with models and make-up artists to use the jam as a backdrop to their images.

In part 1, I’ve posted a gallery documenting all the art work from all three jams.  This selection of pictures aims to capture the afternoon, hanging out in the tunnel and watching everyone both working hard and having fun.

I started at the Lower Marsh end of the tunnel and walked up the slope to explore the outside end first.  And on my way, I passed these two works. Both were by artists that I’ve not seen painting in London before. And that was exciting. 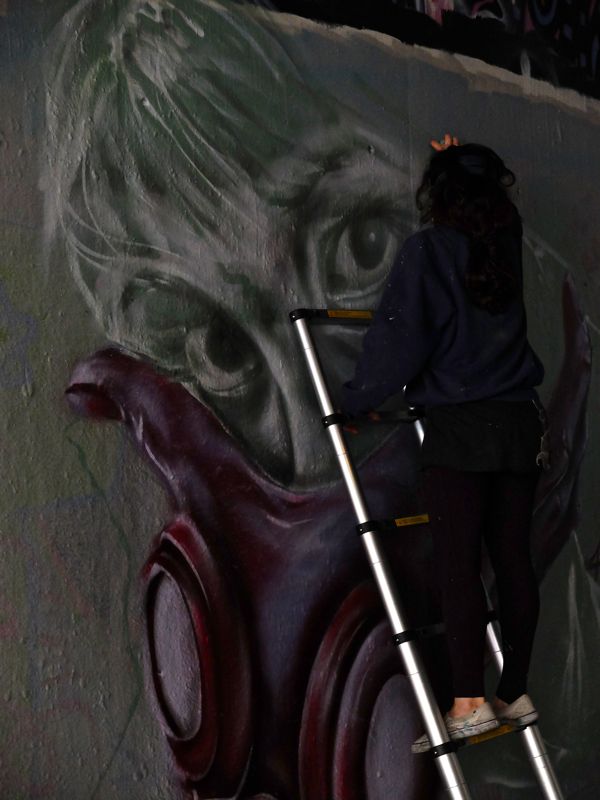 Some artists had come alone with out anyone to hold the ladder but help was on hand from fans who were there to support the event.

I re-entered the darkness of the tunnel to look at the rest of the work. 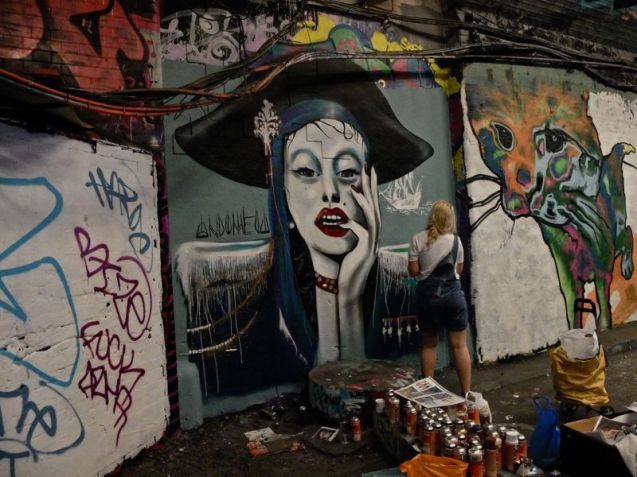 Artist Andromeda putting the final touches to her piece.

And then the snappers caught up with me.  They had flocked to this stunning work by JXC painted the previous Saturday, 30th April. And those of us who document the London street art scene were surprised by how long this had lasted in Leake Street. Most work gets tagged or painted over daily.  The nearest mark is the 1.T in a circle near the head.  So this shows how much respect there is for this work that it has been treasured like this. 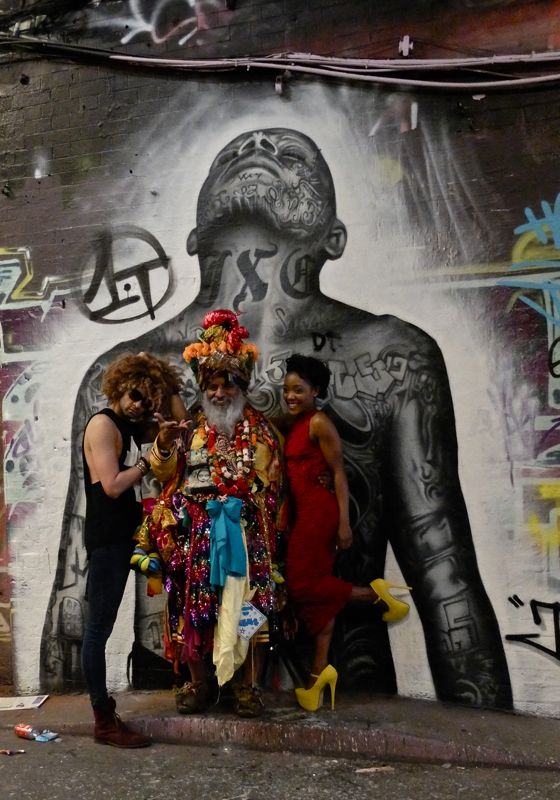 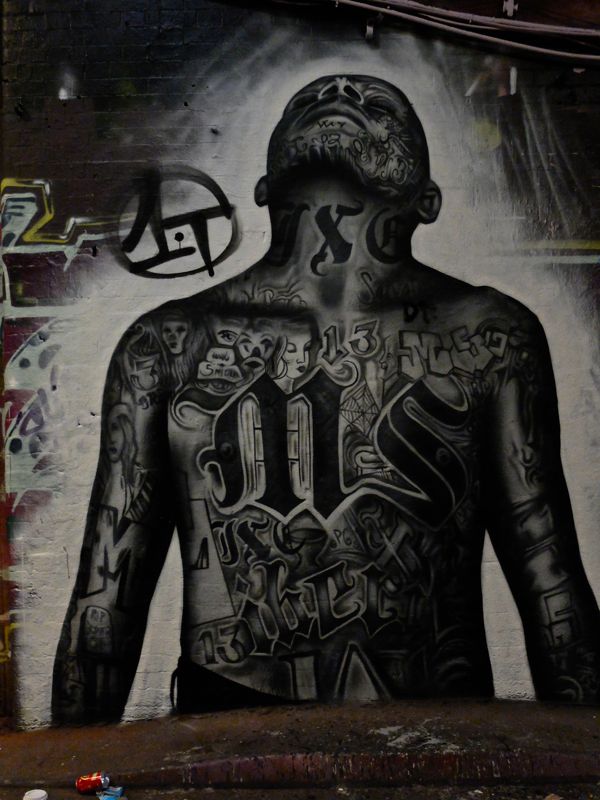 On my way to Leake Street, I had stopped off around Brick Lane to capture some small Annabelle Tattu paste-ups that I’d seen posted on IG.  I had no idea though that she would be painting at the jam. So to come across this wonderful mural was deep joy.

Her technique was a combination of paste-ups, spray cans, paint brush and stencils. 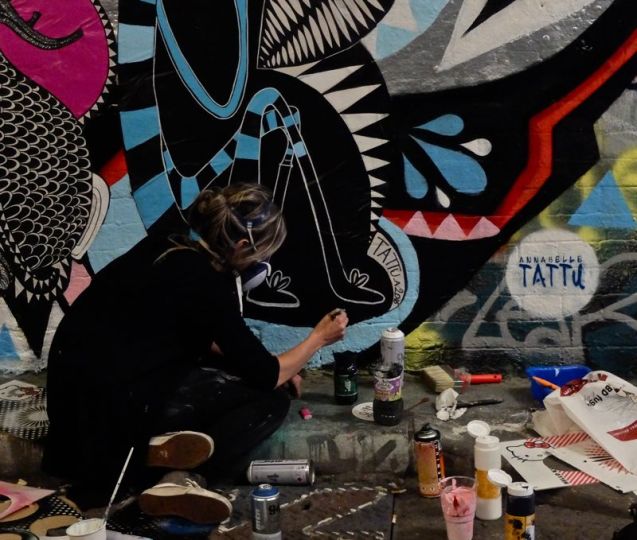 It was recently explained to me that one reason street artists work with spray cans is that they cover a large area very quickly. Which is important for large murals.  So I was surprised, wandering around the Femme Fierce jam by the number of very fine paint brushes being used.

Right down near the Waterloo entrance was Dizi from Greece.  She must have started later than many of the others because this shot was taken not long after I arrived.  So around 4pm. 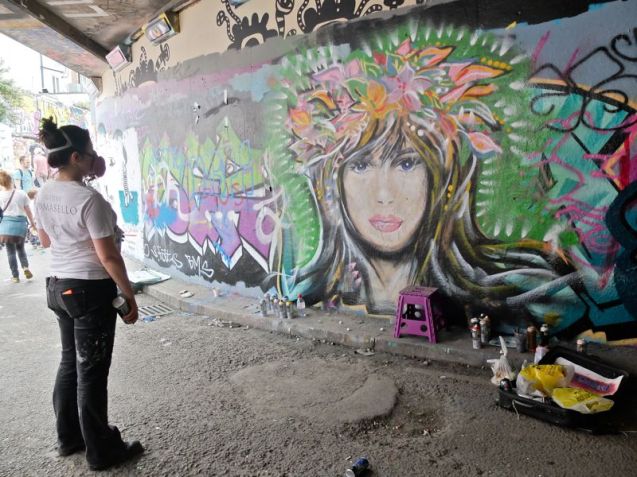 Not everyone was still painting.  Artist Hazard, from Bristol, making her third work for Femme Fierce, had already finished. She said on IG that this took 7 hours to paint. 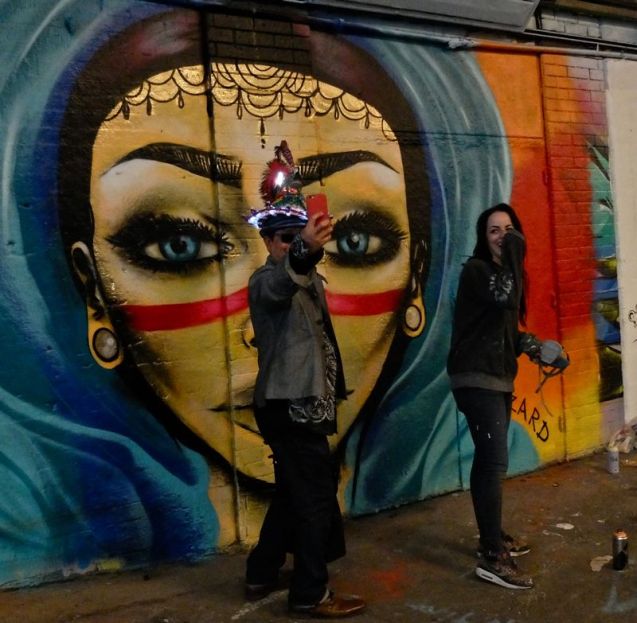 And there were the street art fans.  This next section of pictures captures their joy. 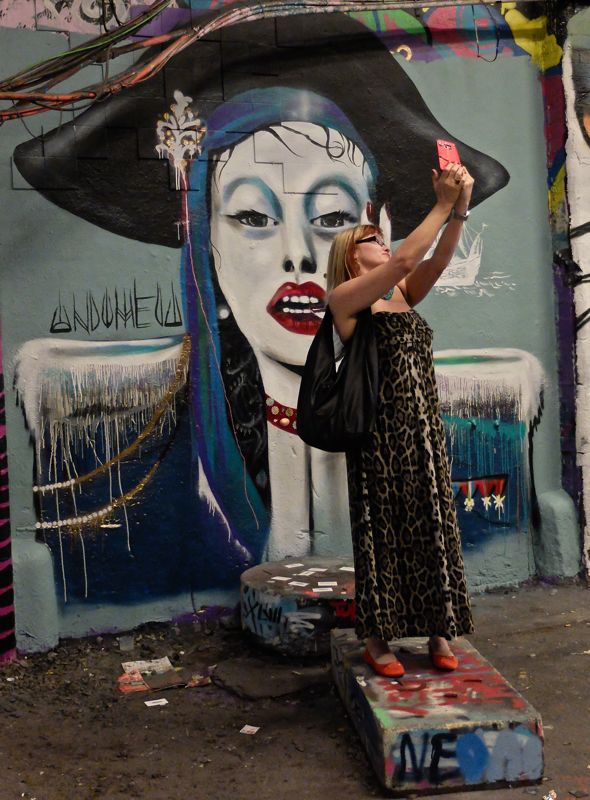 This man in his colourful Indian attire was very popular for selfies and snaps. 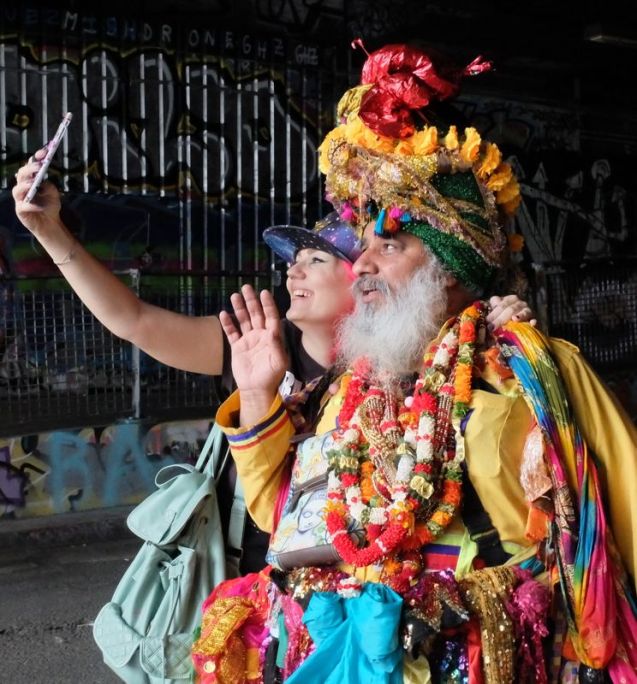 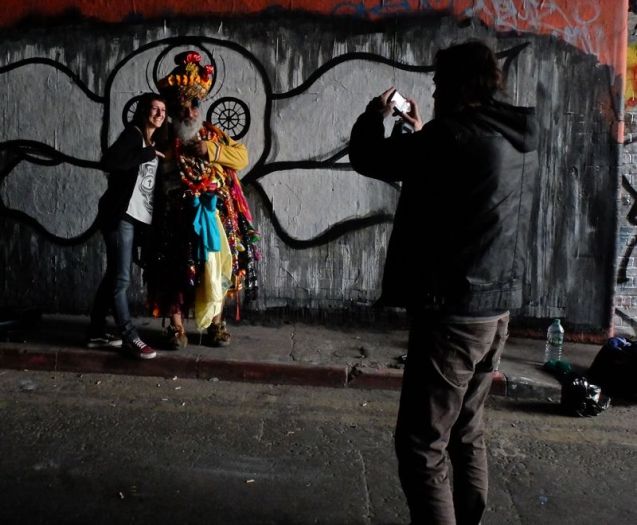 Some artists arrived quite late near the end of the jam.  This woman only started after Giusi Tomasello had finished.  I suspect she’s a big fan of Himbad’s work.

Down at the Waterloo end, away from the hullabaloo, two regulars on the London scene, Airborne Mark and Olivier Roubieu were quietly working away.  Airborne Mark painted an origami pistol folded from dollar bills.  While Olivier worked on his portraiture.  He is hitting up female portraits daily and you can find them regularly in Leake Street and Shoreditch.

And then it was time to celebrate with snaps of proud artists by their work. These are a few that I caught.

By now it was well after 5.30pm and I’d say nearer 6.30pm – 7pm.  And a few of the Femme Fierce women were still here. At opposite ends of the tunnel, Dizi and Dina were grafting away.  And Peachzzx and Alisscurtis were putting the final touches to their work which was directly across the tunnel from this graff writer, quietly sketching out his next piece. He hadn’t even waited for all the women to leave. He was spraying over Avalele’s painting which had only been completed a few hours earlier.  I felt stunned.

Mural by Avalele for Femme Fierce 2016

I know that these are free walls but considering that the JXC piece had lasted a week, this felt like a total lack of respect for the work that day.  And then I looked and around I noticed more tagging.

Mural by Dala for Femme Fierce 2016 tagged before the day was over.

And as soon as Peachzzx and Alliscurtis has left, their work was covered up by these guys.  Incidentally, the JXC work was properly tagged that night.

Meanwhile, beyond these graff writers, Dizi still hadn’t finished her work. It was nearly 8pm and I had to leave. I’d been on my feet, snapping for over 6 hours and I needed to get home. 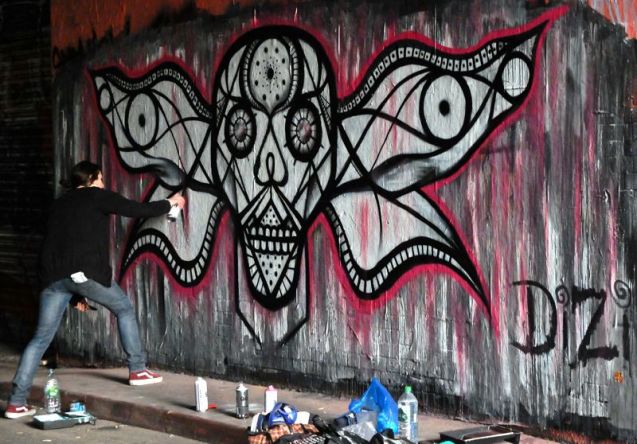 I hope that for 2017, Femme Fierce returns to a complete tunnel takeover and takes place nearer International Women’s Day once more.  This was fun and the work was amazing.  But it could have been so much more and I doubt the boys would have painted over quite so fast, if they had.