I had heard that there was a Banksy, hidden on the wall of the Foundry building to preserve it. I had no idea of its size or what the image was. I’ve since discovered that it is one of his biggest works, painted around 2007, though I haven’t found an exact date yet.

On Wednesday afternoon, I was flicking through my IG feed and spotted a post saying that it was being uncovered right now! So I grabbed my camera and hopped on a bus to have a look.

The work has been preserved behind a plywood covering. You can see it below, the slopped raised area against the rear wall of the building. By chance, I was walking past when the hoarding was down last August and spotted the early ROA work painted in 2011.  The prophetic lettering, The Last Days of Shoreditch are by Ben Eine.

By the time I arrived the plywood casing had been totally removed but part of the work was still covered as you can see from the photograph below. 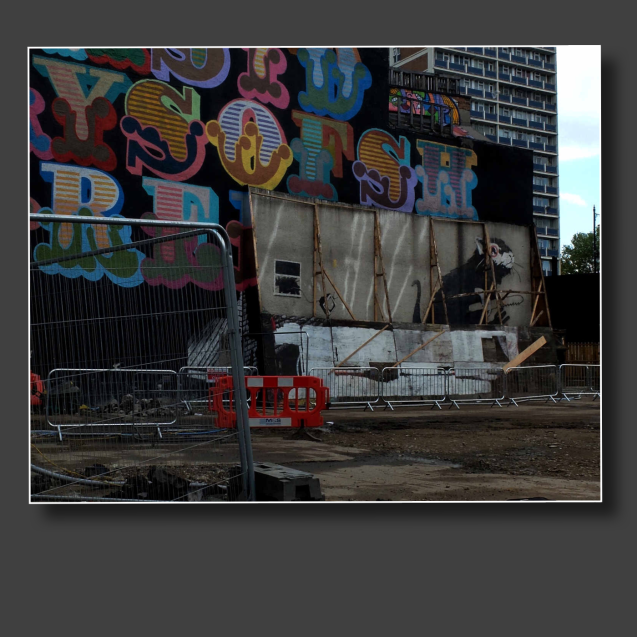 There wasn’t a crowd watching. A few fellow fans like me and then a large street art tour arrived who had no idea how lucky they were to catch this famous work on the day it had been revealed. For anyone less familiar with Banksy’s work, the giant rat, the broken window and a TV being thrown out of it are all part of this giant mural. The white marks are some tagging of the work.

I got chatting with a friendly security guard who explained that the owners of the building were going to cut out the Banksy mural and display it within the new building, an hotel. I’ve since found out that this hotel will be eighteen stories high and include a ground floor art gallery to display this work and presumably other art works.

Someone in the crowd gleefully said that the hidden area contained the words ‘Eat The Rich’ which is why they were still covered up.  Certainly, that giant rat, poised with his knife and fork, does look hungry, so it made sense. When I got home I did some online research and discovered that the actual slogan, Eat the Rich was graffiti only on a wall in Deptford, South London, with sub-title “with our 2 for 1 offer including a choice of wine.”

I think the real reason that Foundry mural is partially hidden is because the bottom area is heavily tagged as you can see from this comparison below. Dave Stuart’s IG feed shows this too.

Does this mean that the work is going to be cleaned up for when it will go on display once the hotel is built?  Will it then be street art? The Banksy work has to stay and be part of the new building because that was a condition of planning permission, decided by Hackney Council.

On Saturday, I had another wander around Shoreditch and Brick Lane thinking about the interaction between artists who write, paint and paste their work on walls for public consumption. To the uninitiated it can look either a mess, or disrespectful to tag or draw over another work. Having followed the scene for 5 years, there is definitely a dialogue going on. Often adding to existing work. And sure there is some angry spraying from people who feel either left out of the conversation or simply being naughty.  These works caught my eye that afternoon.

On Saturday I also spotted that Stik’s mixed race couple had some new graffiti. This work has been in place off Brick Lane since 2011 (I think) and it is regularly tagged and cleaned up.  Is this week’s effort a comment on our difficult times and tensions during Brexit? 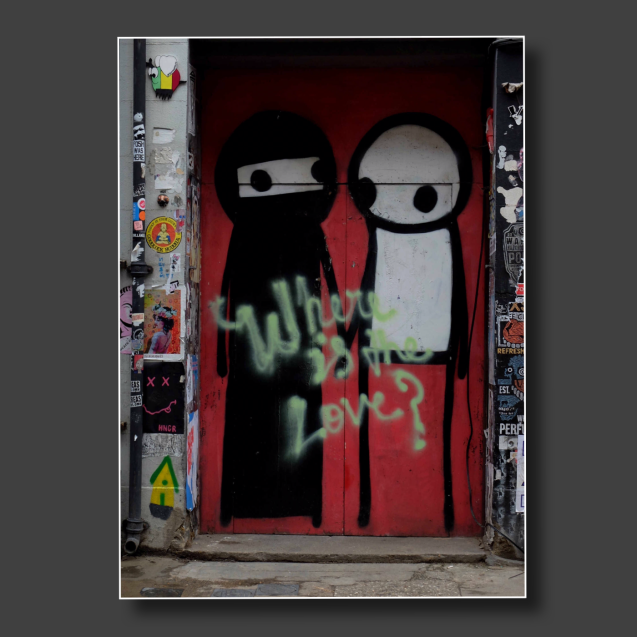 Art by Stik with additional graffiti. (Photographed 11th May 2019)

Today I ventured over to Hackney Wick which is now 95% graffiti and I saw some fabulous writing and letters there.  But I also came across this old work by Mateus Bailon which has been there since 2013.  Does the way in which it is tagged look familiar?   I guess a time will come when the rest of the work will be painted over but I found it interesting that the taggers want to be seen rather than totally destroy. And I think that is what is going on with the Banksy work too. 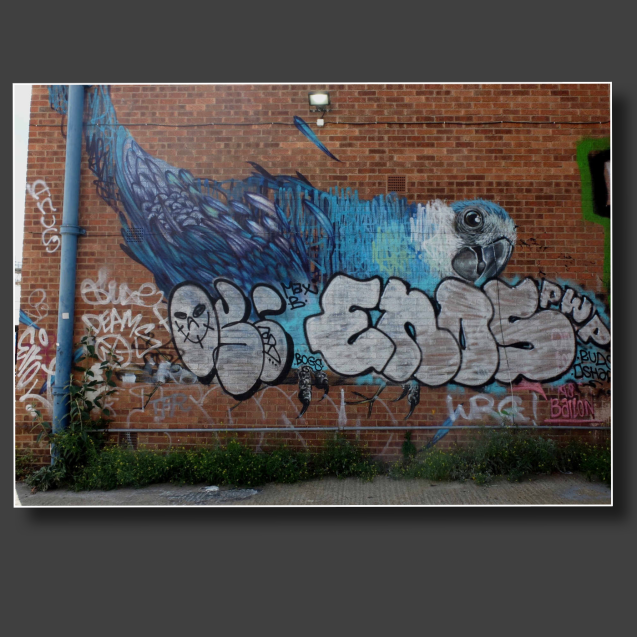 Do you think the Banksy should be cleaned up? Or displayed as it has been preserved to keep the real vibe of street art and graffiti alive in Shoreditch?  Or are we only going to be left with this?

My personal love of this scene is the way the work and walls are perpetually changing and evolving. This is not simply an outdoor art gallery.  This world is about being free to communicate in a multitude of ways without the censorship or control that galleries have on what we can see and say. I hope the scene lasts and doesn’t end up with select curated walls.