Yes, lets time travel back 2 years and complete this post which I started but never finished due to a bereavement. I was also experiencing eye trouble and had to reduce my online time which prevented me from blogging this year. My apologies and thanks for still reading this blog. Welcome if you’re new.  🙂

It was a good year for paint jams and festivals: a full 3 days of indulgence at Upfest down in Bristol, the excellent annual Meeting of Styles in Shoreditch, plus two indoor jams with London Calling Blog. But a sad year for the loss of spots in East London and Camden due to gentrification nearing completion. That means they take the hoardings down!

The year started on a high at an indoor paint jam in Soho, invitation only, to London Calling Blog’s Brokedown Palace Paint jam. This was a celebration of 2 years of blogging about street art and graffiti. If you want to research the scene, London Calling blog is the place to go for excellent coverage and photos.

I was also immortalised by pen and ink artist Lis Watkins in her sketch book.

I loved this soulful mural from Italian artist Vera Bugatti which appeared near Old Street. It lasted for over 6 months but now this spot is lost to adverts! 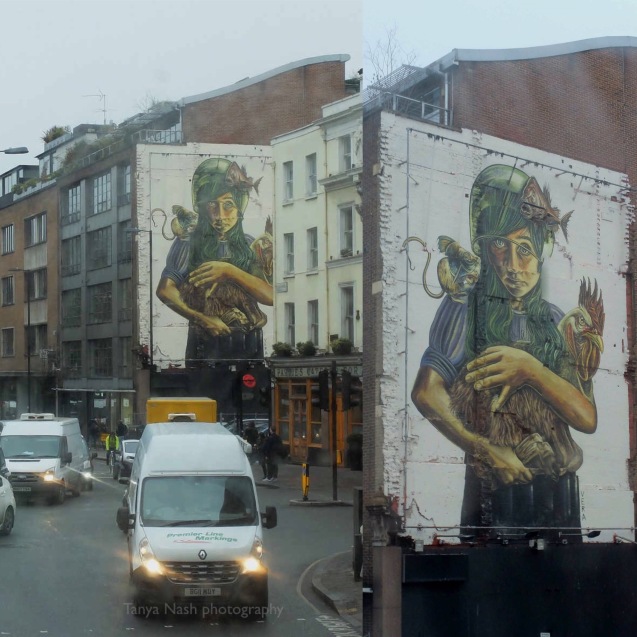 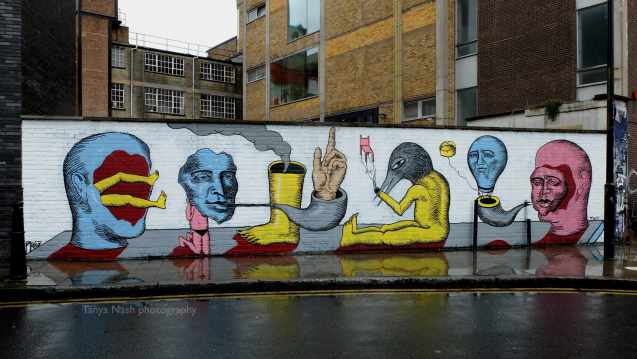 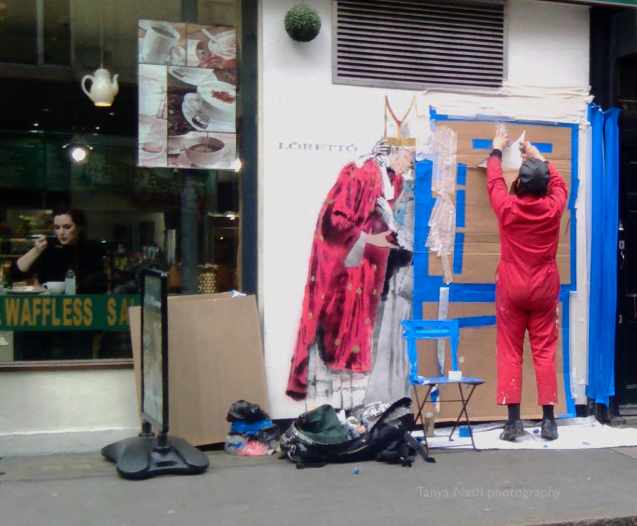 Artist: Lorretto at work in Soho. I never managed to capture the finished work. But I spotted many others over coming months. (photographed 6th February 2017)

Fall of Empire by Jim Vision. This is a section of a long panoramic mural which runs nearly the length of Holywell Lane, Shoreditch. (photographed 16th March 2017)

Lucid Dreaming by Himbad was on at BSMT Space in Dalston. 24 minature works of delight and mischief.  Exit from Aden by Alo, a 2nd solo show at Saatchi was also magnificent. Two of my all time favourite artists showing in the same month. Almost too much excitement.

Shoreditch landmark, ROA’s hedgehog, painted in 2012, gets tagged from time to time. Jim Vision cleaned up the tags and added some Native Americans to protect it. I also went to South London, to Croydon to see work from London Calling Blog’s second jam of that year, Any Colour You Like.

Gallerist Greg Key hanging work for artist Himbad‘s show Lucid Dreaming at BSMT Space Gallery. Plus 3 works from the show. From top to bottom: Til Dawn I Sleep, Transmutation and (photographed 9th March 2017)

The opening night of Exit From Aden by Alo at Saatchi gallery. (photographed 16th March 2017)

Portraits were the flavour of this month. Two distinctive but very different artists painted some major works. Ant Carver took over the Shoreditch Art Wall.  And Dreph began his series entitled You Are Enough to celebrate influential black women with his portrait of Holly Diana May Oluwo on Commerical Street.

Hackney Road has lost many of its spots but two buzzed again. Zabou and Koel painted the shutter of Fiorelli Shoes. It was the last work before being renovated. And Alex Senna visited from Brazil to paint the end wall near Ion Square. This tied in with his solo show The Nada at Unit 5 Gallery nearby.   Austrian artist HNRX was manically painting new work everywhere.

I also loved the East End Mob show at BSMT Space which featured 12 the artists who were part of East London Scene in the early days including Mighty Mo, Rowdy, Sweet Toof, DScreet, Tizer and Vinnie Nylon. 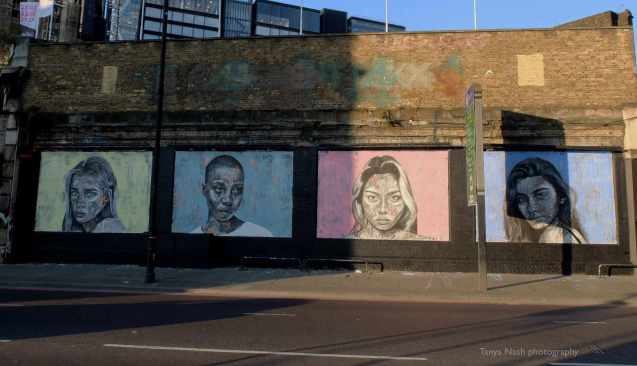 A quiet month for me in terms of taking photos. But I did spot four new miniatures from C215 (artist Christian Guémy) around Brick Lane painted for his solo show at Stolen Space.

In June, south of the river was the place to be; for the Brockley Street Art Festival and a tour of the Penge streetart scene. SprayExhibition20 (a clever use of the Penge postcode SE20) is a series of new street art and graffiti curated by London Calling Blog. And thanks to the Overground, its so easy to get there!

Artists of note: Dreph was producing more magnificent portraits in his series You Are Enough. And Loretto was throwing up more satirical stencils in Soho. 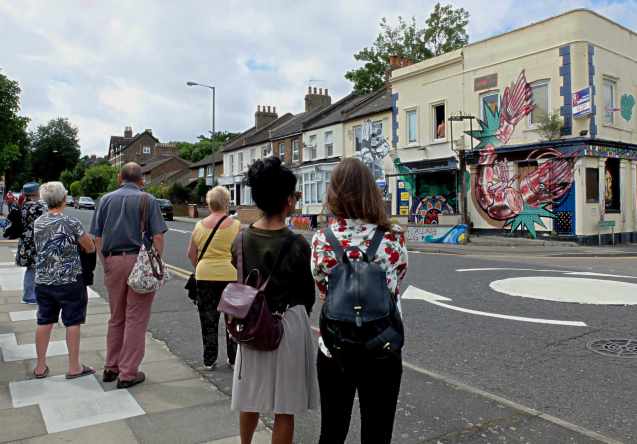 Portrait of Mimi Fresh by Dreph for his series You Are Enough. Penge. (Photographed 25th June 2017) 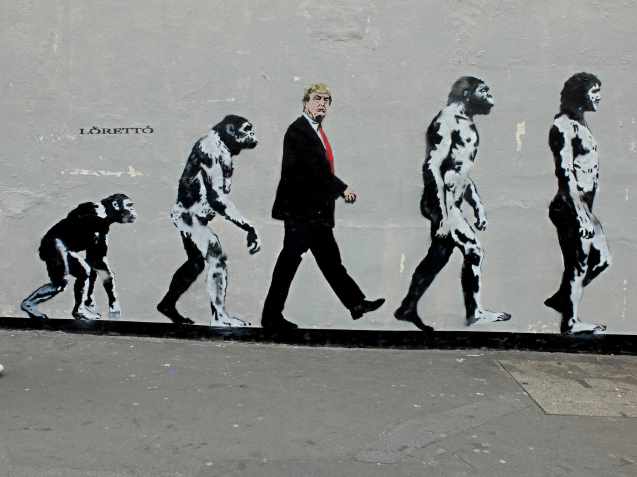 Festival Time: The month kicked off in Shoreditch with Meeting of Styles, run by the excellent team End of the Line. Their giant wall collaboration was fan-bloody-tastic. And introduced me to Danish artist Baelstrom who was part of that collab. And I discovered who had painted a distinctive yellow and black image which I had loved in Leake Street (Nov 2016), artist, Maikel Walkman.  And three days of Upfest in Bristol was stupendous, awesome, and beyond words. While I was there I also saw some preserved walls from street art legends, Stink Fish, Rowdy and of course Banksy!

Back in Shoreditch, the Village Underground wall hosted a moving tribute to the victims of the Grenfell Tower tragedy which happened on the 14th June. It was painted by Ben Eine with words by Ben Okri. 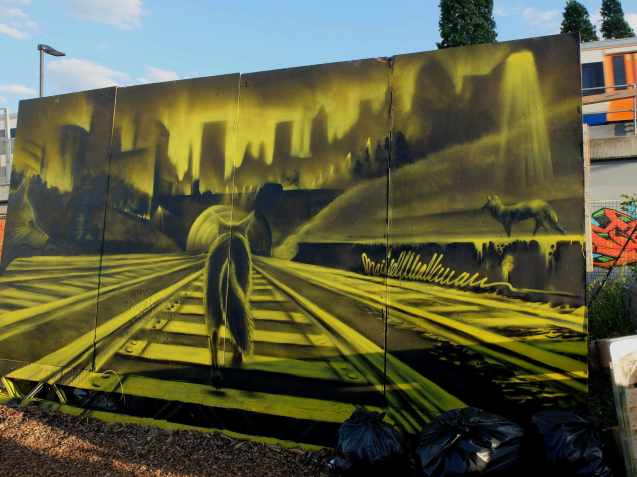 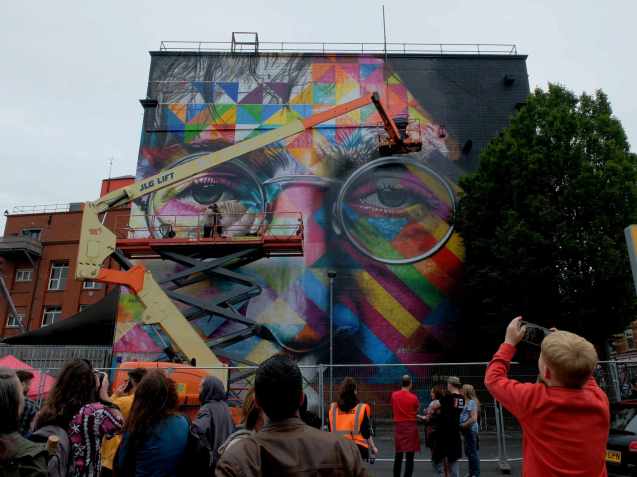 Elephants popped up all over London, thanks to a visit from South African artist Falko. He even added a cute baby elephant to an iconic work from Stik off Brick Lane.  Its now been removed.  Nick Flatt and Paul Punk visited from Germany and painted a really cool abstract work on Sclater Street, Shoreditch. And over in Hackney Wick, the Gums and Tongue Crew had a jam on Fish Island. Will that be their final one as the apartment blocks colonise the area?

Artists: Nick Flatt and Paul Punk. On facing wall is a Himbad and graffiti from Fours. (Photographed 23rd August 2017)

Two more top exhibitions. Portraits in Transit by StinkFish at the BSMTSpace. And Sad But Happy by Herakut at Stolen Space.  I didn’t know the work of this German duo Herakut but I was so moved by their work. Their concept is that we’re living is frightening times but we can remain happy with our private fantasies.

Banksy painted a new work! In support of the Barbican exhibition of work by the legendary graffiti artist from 80s New York, Jean-Michel Basquiat. So pleased that I managed to see the Banksy before it became enshrined under perspex. 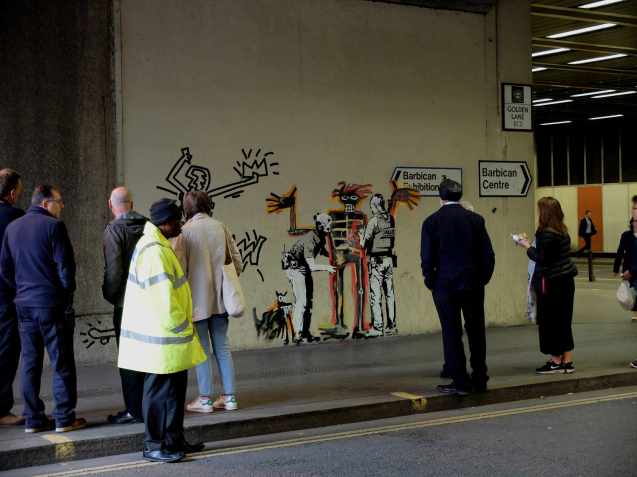 The Moniker International Art Fair contained a glut of excellent art. I particularly loved work by Dulk1 and Jaune Art.

And I had another treasure hunt, on Fish Island, Hackney Wick, tracking down 21 miniature paste-ups by Pablo Delgado!  3 blissful days of sleuthing which I blogged about too.

On Curtain Road, Shoreditch, was the unveiling an old but now restored work by Banksy, The Snorting Copper, painted in 2005.  This had been discovered during a renovation and was restored by the new owners of the building and put on display for us to enjoy. 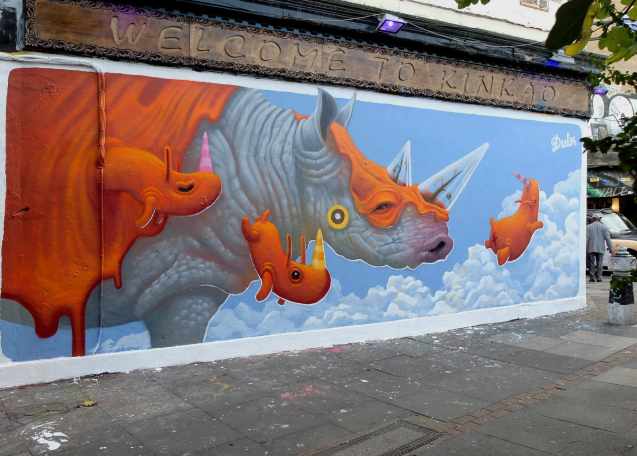 A sad month indeed for Shoreditch street art. We finally lost the ROA hedgehog on Chance Street.  This work by Darren John replaced it. And now the wall is given over to adverts!  RIP, the ROA Hedgehog (2012 – 2017).

Over on Fournier Street, Shok-1 painted an extraordinary piece  for Remembrance Day.

On a positive note, I finally got to see Carleen De Sozeer’s extraordinary work celebrating Hip-hop over in Dalston. 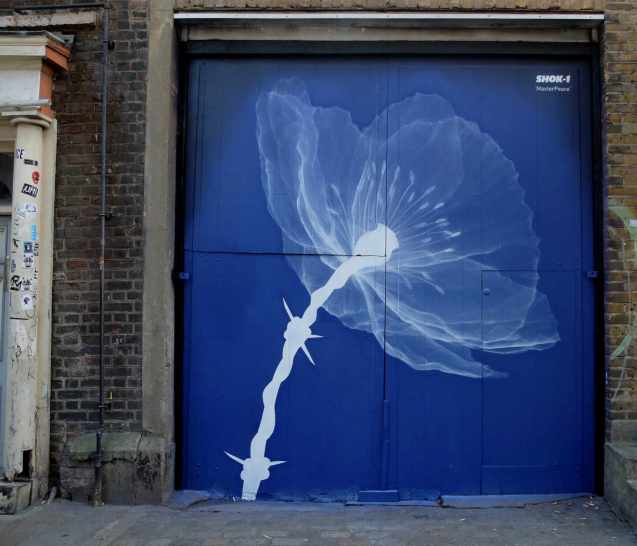 The year ended with three more exhibitions: Brexmas, a group show at the Crows Nest Gallery in West London.  Cut and Run by Sweet Toof and Swedish writer Rolfcarlwerner at BSMT Space.  And on New Year’s Eve, I squeezed in Street Art Fans at the Fan Museum in Greenwich.  That final show was fun but weird to see such familiar work beautifully transposed onto fans.

I hope you enjoyed reading this post. I’ve had so many ideas for posts in 2018 but ill-health mostly prevented me from writing them. I’m working on my 2018 round-up. And I plan more posts for 2019.  I wish you all a very Happy New Year.