Some of you may already know that Leake Street Tunnel or at least part of it, has been sold to developers. How much of it will change is unknown to me. But change is already underway as this picture from Saturday 12th November shows. The area behind the hoardings is being turned into shops covering nearly a third of the tunnel along this wall.

Leake Street tunnel with fresh hoardings to show where shops are being created along this stretch of wall. (photographed 12th November 2016)

The history of Leake Street Tunnel

The tunnel and its arches were built to provide structural support for Waterloo Station and it was owned by Network Rail.  It is about 300 metres long and comprises of a roadway plus a series of arches with empty spaces behind. In the past the Old Vic Theatre have hired some of its spaces for promenade theatre productions. Currently one section is used by The Vaults theatre. And I’ve seen ‘stuff’ being stored there by workmen. But most of the space has lain empty for decades.

It was Banksy who put the tunnel on the map as a place to create graffiti and street art. In May 2008, along with 29 other artists, he created “The Cans Festival” to convert “a dark, forgotten filth pit into an oasis of beautiful art. I’ve always felt anyone with a paint can should have as much say in how our cities look as architects and ad men,” Banksy said.  These quotes comes from this BBC news coverage of the event.

And it has been a fantastic space to create street art and in particular graff writing ever since. Yes it is legal to work here but the rapid turn over of work gives it an edge to other areas where the walls are curated and where work can last for weeks or even months and years.

In Leake Street if your work lasts more than 24 hours you know how respected it is by other writers. Or it can be tagged immediately in disgust or jealousy.  There have been many paint jams since 2008 including the first legendary Femme Fierce jam of 2014 when the whole tunnel was buffed up pink.

Work from 2016 Femme Fierce being written over before the day’s jam was finished. (photographed 7th May 2016)

Leake Street and the vibe

Each time I visit I’m struck by the magic of the space. You’re entering a tunnel which in itself creates a mysterious atmosphere.  The graff could be modern hieroglyphics to my untrained eye. Colourful images cover the walls and ceilings. Some are in 3D like ancient fossils stuck to the surfaces.  And then there’s the smell, a heady mix of paint fumes and occasionally other noxious substances. And its still filthy like an historic cave. So it is an exciting place to go. 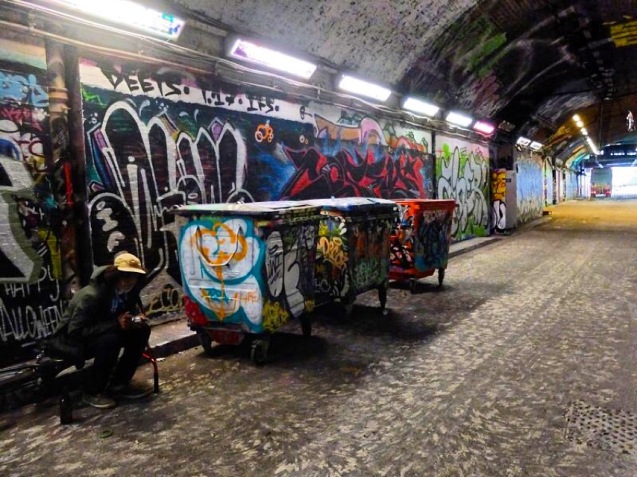 Leake Street tunnel last year. You can see how the wall looked before the developers started work this year. (photographed 28th November 2015)

A Nightmare on Leake Street

In light of the recent development and because the tunnel has became a beacon for graff writers around the world, its fitting that possibly the last paint jam to cover the full length of the tunnel happened over Halloween.  Writer and artist Skyhigh assembled about 30 other artists and writers from a variety of graff crews to paint the length of one wall. My photographs document the whole wall in order, starting at the Lower Marsh end and finishing at the Waterloo exit on York Road. 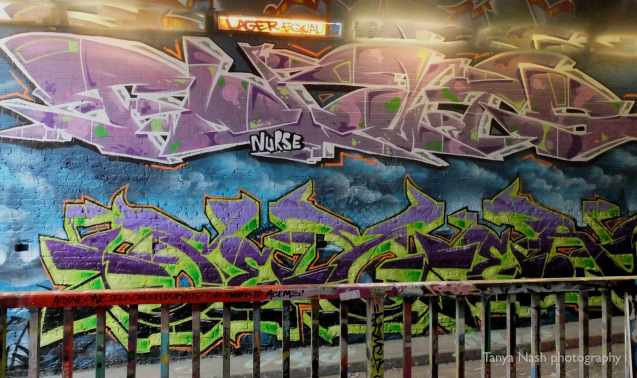 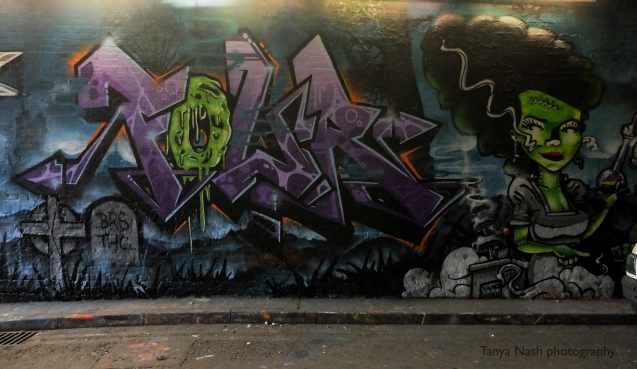 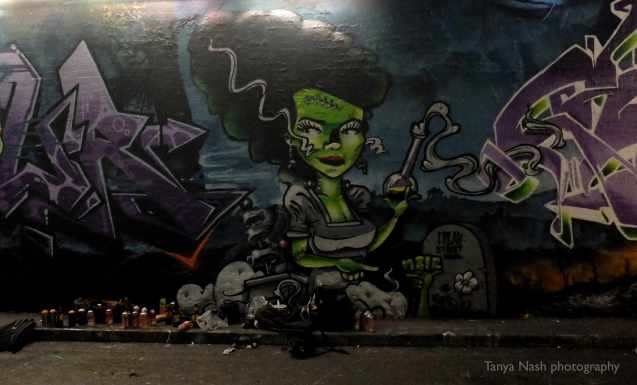 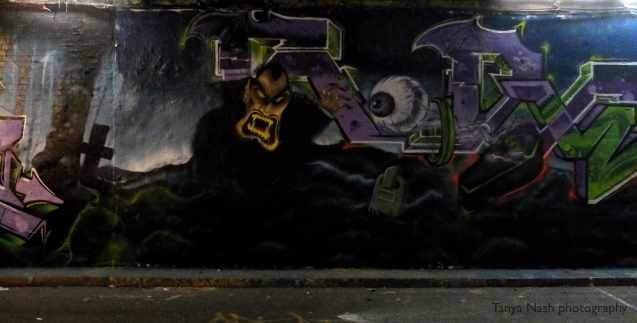 Dracula and graff by Sorez1. Quite appropriate since this artist comes from Bucharest. Blue b/g by Skyhigh. (photographed 1st Nov 2016) 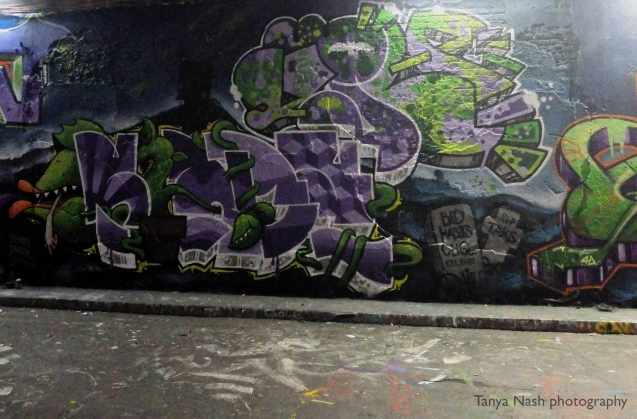 Detail and b/g by Skyhigh. I thought the attention to detail was fantastic. (photographed 30th Oct 2016) 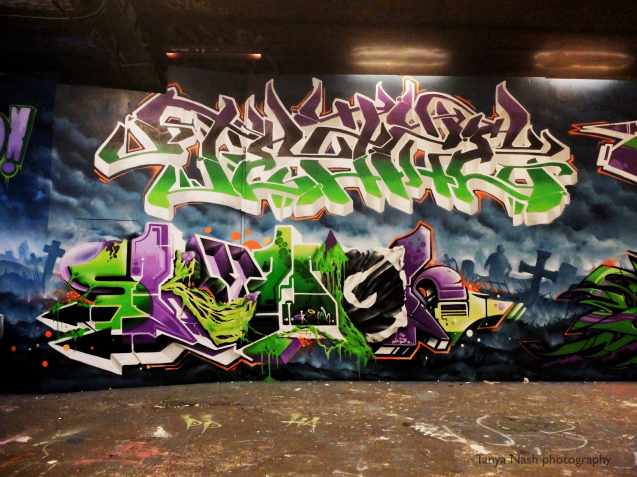 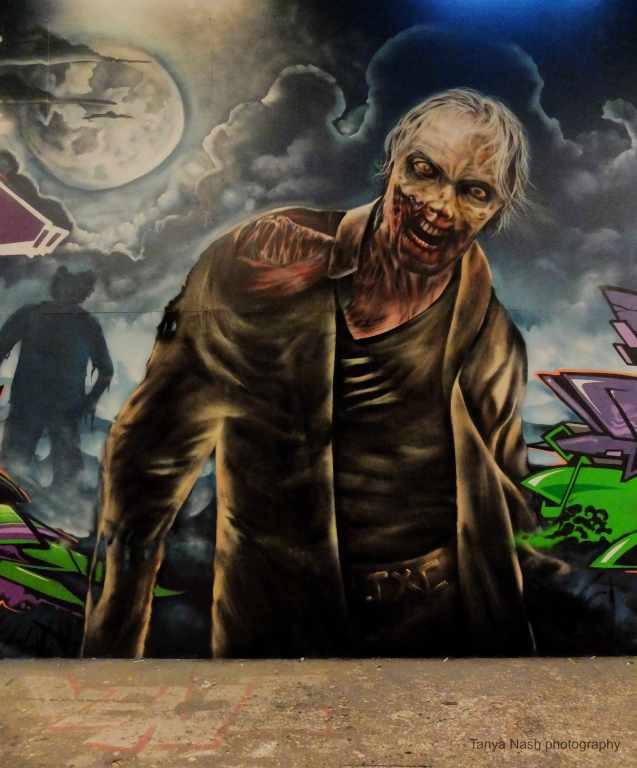 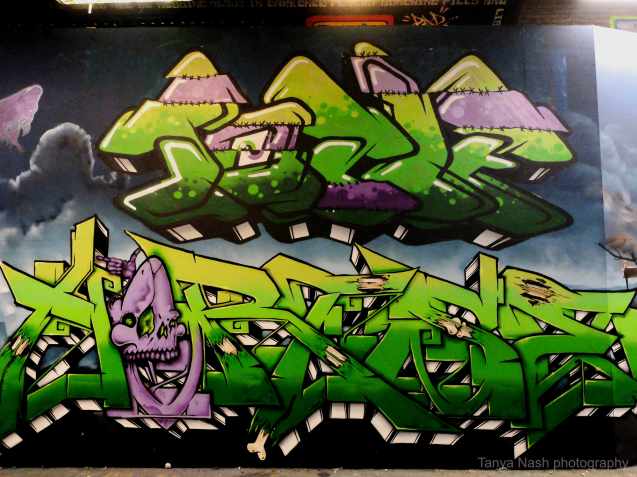 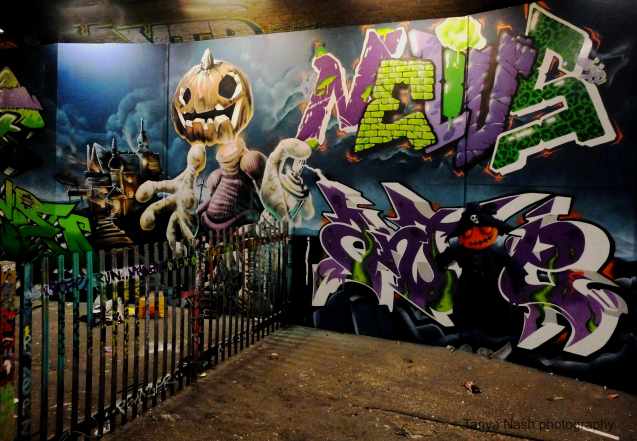 Graff writers unknown to me. Will update when I know. (photographed 1st Nov 2016) 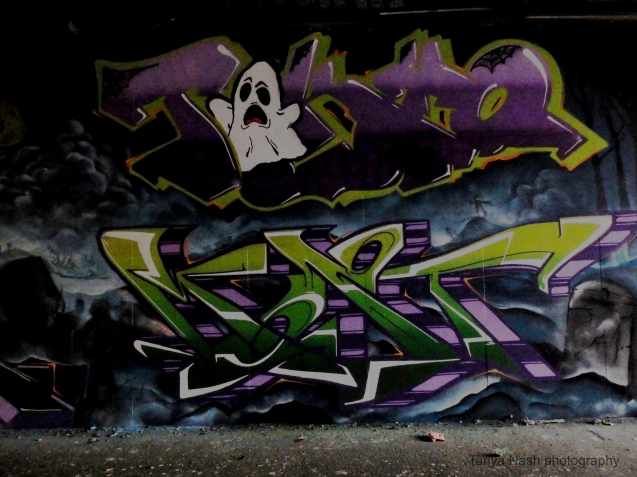 Much of this amazing project lasted a week untouched.  And when I visited yesterday I was able to photograph a section I’d missed because on my last visit it had been blocked  by a van.  And then I watched as Samer’s pumpkin graff man was buffed over for a new work, two weeks after it was painted.  This project was loved and respected big time.

So well done to Skyhigh and all the crews involved in this fantastic piece of team work. And a stunning set of murals.  I hope that Leake Street tunnel continues to provide “an oasis of beautiful art” in the heart of London.  We can only wait and see how the refurbishment will affect it.