I often find out about new pieces of street art thanks to my fellow bloggers and in particular the ones best seen after dark.

Street artists earning a living from advertisting is a growing trend. And over this summer Sony commissioned five artists to paint murals to promote their latest smartphone. And they were to paint them using Ultra Violet, aka ‘glow in the dark’ paint. Btw – how many of you had those stars and shapes you stuck on your bedroom ceiling which glowed when the lights went out?

The luminous colours of the UV paint created a brighter shimmer on Dan Kitchener’s Liquid Lights design.  I decide to photograph it in the next couple of weeks.  Then two more posts appeared of other UV painted murals. There were to be 5 in total. The third mural I read about was further afield in Camden. This was why I only snapped last month by daylight. 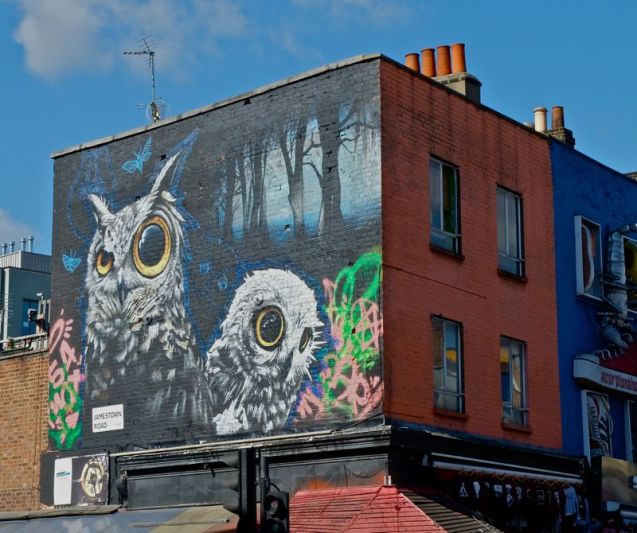 Two days after the second post appeared, I paid a night time visit to the two murals in East London. Dan Kitchener’s Liquid Lights in Clerkenwell and Zina’s work in Shoreditch.  And I shot this next photograph around 10.30pm. 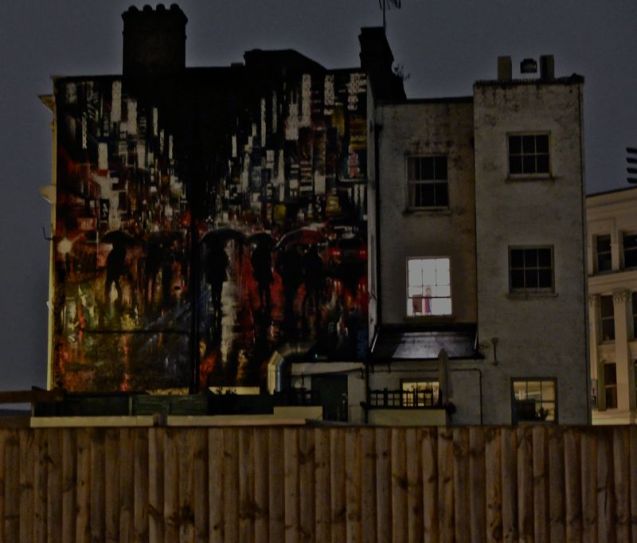 Oh dear. No matter what exposure or ISO I set, the images did not have that UV luminous glow that I was expecting.  I even tried waiting for a bus or lorry to pass, so that extra light from their headlights might make it sparkle. But that didn’t work either.  Maybe if I had been into clubbing, I might have twigged part of the problem straight away.

Disappointed, I caught another bus to Shoreditch to look at Zina’s work which had been well documented by Inspiring City blog.

Now as this work had only gone up a few days earlier, there seemed to be some extra light above it. But that light shone over at me and not on the mural. So again, this was my best result.  There are no UV effects here either.  What was I doing wrong?

I went home and left a grumpy message on Inspiring City’s blog which they replied to with their usual helpful kindness.  By they couldn’t understand why I hadn’t got the effect either.

You know the cautionary phrase -” you should always read the small print“. Well right at the bottom of the London Calling Blog’s Dan Kitchener post and in regular sized font they advised “the lights come on at 9pm and will be viewable at night until July 22nd.”  I wasn’t sure what these ‘lights” were but I realised this paint effect needed help which normal street light doesn’t provide.

Then I had a piece of luck.  Amara posted on twitter that her mural was nearly complete and the lights were being turned on at 9pm.  I had no idea she was even painting one but I was free that night.  And I arrived around 8.15pm to make sure that I didn’t miss the big ‘switch on’ moment.  Even without any special light effect, the near finished mural already glowed luminously. 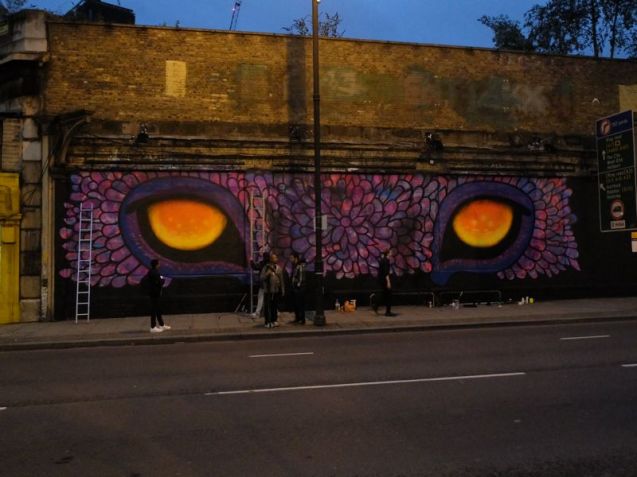 All that was missing were the pupils of the eyes.  It always amazes me how fast these artists work.

Whilst she was finishing her work, I decided to stroll over to nearby Redchurch street and look at the fifth mural in this series painted by Replete. 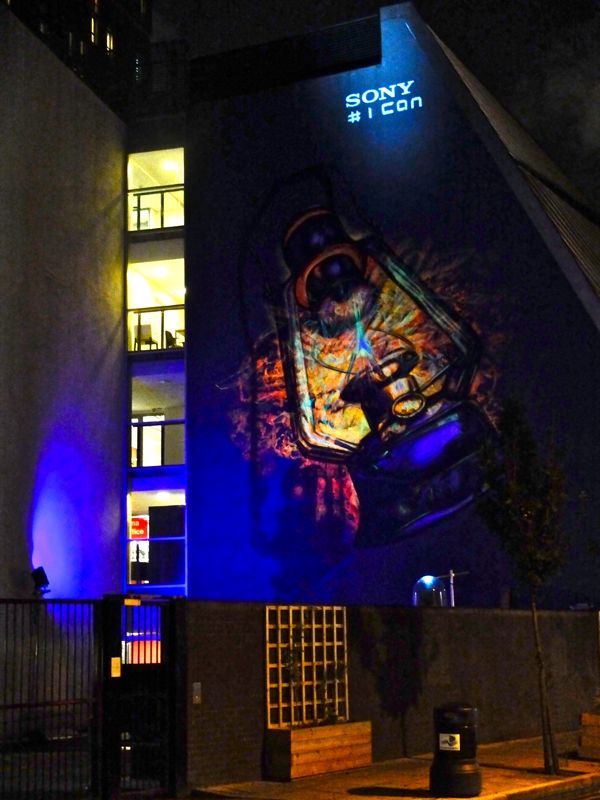 Bingo!  The light was already on.  At last I could see why my earlier photographs had not worked.  The UV paint effect needed a special UV light to glow in those magic luminous colours.  And this mural is very a neat idea. Using glow in the dark paint to create a glow in the dark lamp.

I returned back to the Shoreditch Art Wall now very excited to see how Amara’s mural would be transformed once the lights went on.  Which they did a few minutes early at 8.45pm.  The effect was very classy.  And created some beautiful images. 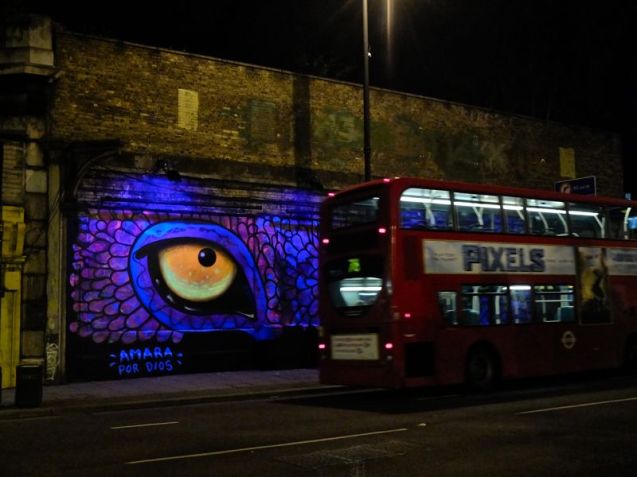 UV, glow in the dark paint

When I was snapping Amara’s mural, another photographer with a big DSLR commented that he had previously got his best results at 2am.  At the time, I could not understand why they might be better then. The street lights in London don’t go off at night.

Thinking now about those glow in the dark stars on our bedroom ceilings, they work by absorbing light and emitting it once its dark.  So once those special UV lights went off, the paint would give out a stronger glow.  I wouldn’t have felt safe lurking on London streets to see that effect but I’m glad I’ve worked it out at last.

This design was similar to one she’d painted earlier in the year on Sclater street but because that street is much narrower and always full of parked cars, I wasn’t able to stand back and get the full effect there, as I could here.  So I went back to admire and to photograph it in daylight too. And these pictures were taken two days later.

And if you’re wondering what the people are looking at on the opposite wall.  Artist Dreph and his team were finalising his work advertising the new film about the Kray twins. NB: mural to the left, of a woman’s face, is another work by Amara Por Dios. 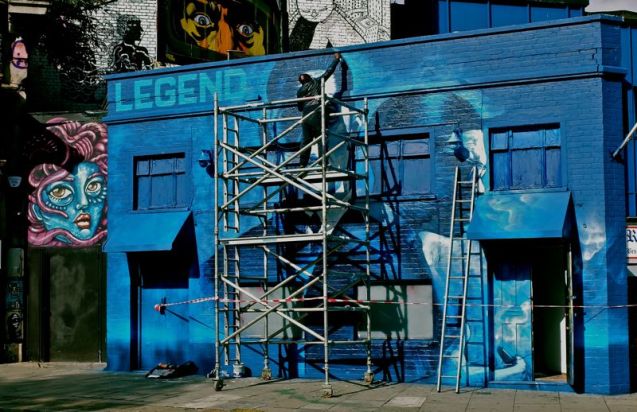