Whitecross Street Party 2015 and The Rise of the Non Conformists

“The ‘Whitecross Street Party’ and its larger than life street art exhibition ‘Rise of the Non Conformists’ started way back in 2010 when a small team of disorganisers took inspiration from the local dissenter’s graveyard. This hallowed ground where William Blake’s spirit was laid to rest provides the perfect setting for the event which encourages peaceful non-conformists to rise once again.”  (from WXSP website.) 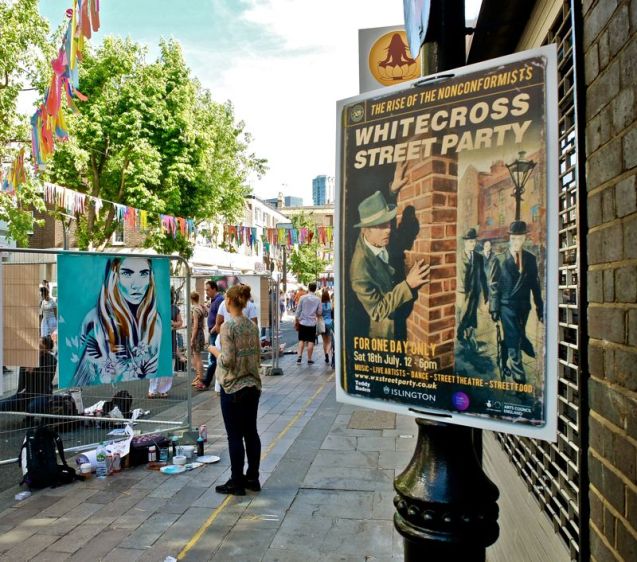 I missed this event last year, so when I saw it being promoted on twitter last Saturday morning, I knew I had to go along, camera in hand.  For me, the main interest was watching the artists paint.  But it was also a great street photography event, so I’ve devoted two posts to cover this day.  This post focuses on the art. And the second one covers the rest of the party.

Artist working is DS. Finished work next to him is by Mr Cenz

When I arrived around 3pm, Mr Cenz was putting the finishing touches to his signature woman’s face.  In the photo above the artist DS is creating an elaborate stencil work.  I heard that he had around 12 layers of pre-cut stencils to create his finished work.

There were three areas set up like this where artists were working.  One at each end of the street and the third was at the junction with Roscoe street in the middle.  I turned around from spotting Mr Cenz and on the stand behind me, Zabou was finishing off her work. She also uses stencils. She works a lot around East London and I’ve spotted in painting before. 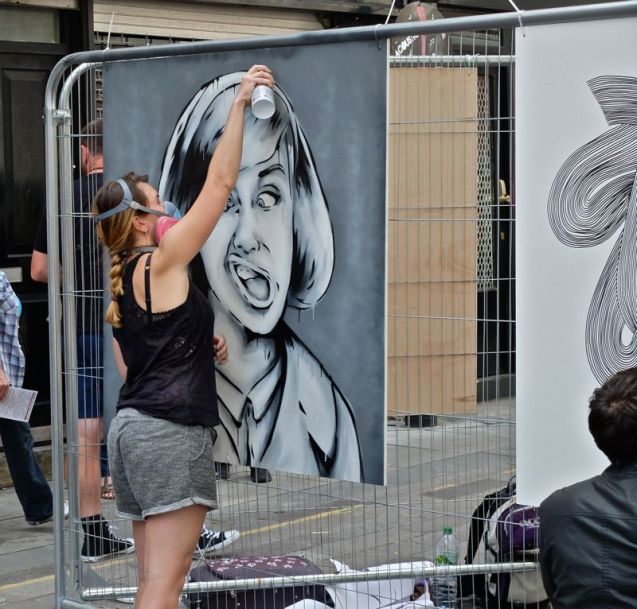 Zabou putting the finishing touches to her work. 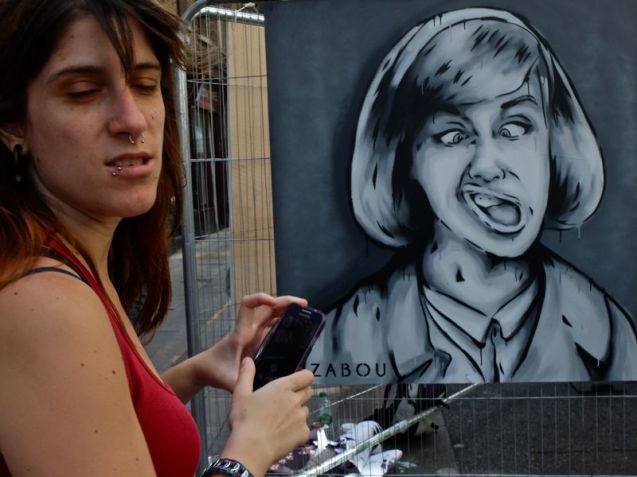 This was one of those photographic accidents that I like purely because the fan compliments Zabou’s image.  I wanted the shot of the fan taking her photo but because I was a moment too slow, this is the result. 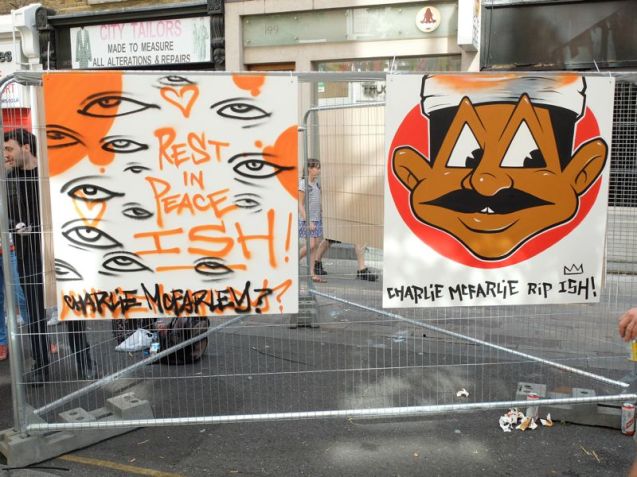 It was fun to watch Charlie in action because I never spotted him adding anything to the board on the left.  Going by the colour palette, I guessed he was painting both boards. But the image on the second board materialised, as if by magic. 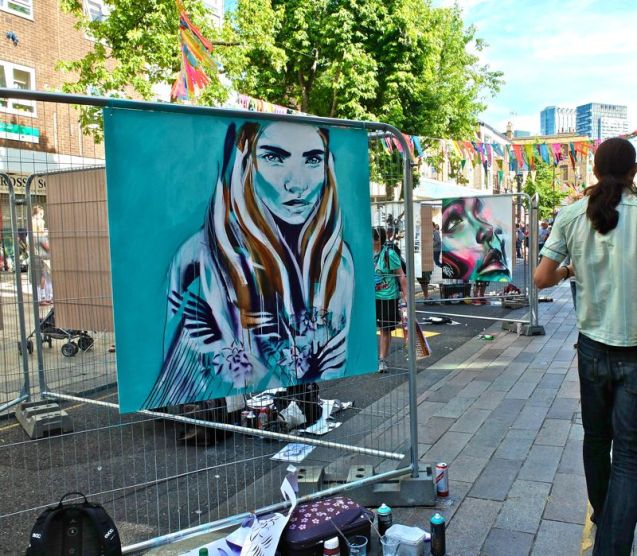 Not every artist started painting at 12pm.  One of my favourite’s Himbad, turned up around 4.30pm. So it was exciting to watch him start with a blank board.  He really has fun with the paint, combing brush work with spraying and splashing it on the canvas. He said, “if its good enough for Jackson Pollock…” 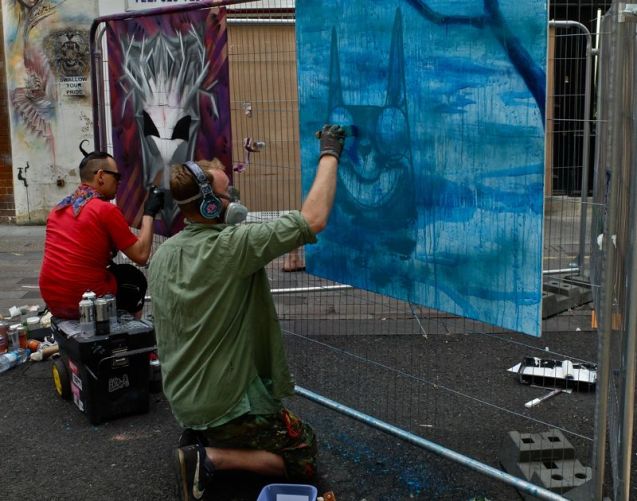 Airborne Mark working on left. Himbad sketching in his signature cat on the right. 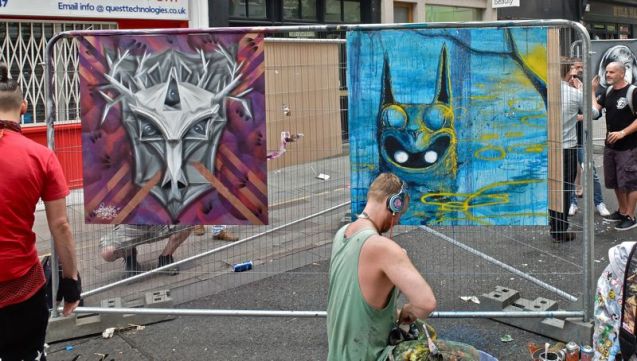 In the middle of Whitecross Street, near a live music area, was a new artist to me, Andrea Tyrimos.  She works on canvas, with some of the smallest brushes you’ve ever seen.  Notice how the fake canvas brick pattern matches perfectly with the wall.  Thanks to Inspiring City blog, I discovered that she’s a WXSP regular.

Walking on past Andrea Tyrimos to the centre of Whitecross Street at the junction with Roscoe Street were these selection of works.  I snapped them once they were completed in the late afternoon.

Black and Red abstract by Fats. Bird by ATM

Resembling a an exquisite piece of fabric, this work by fetch.

The textured background of this portrait by Leeks is beautiful and unexpected.

JCC putting the finishing touches to her painting. 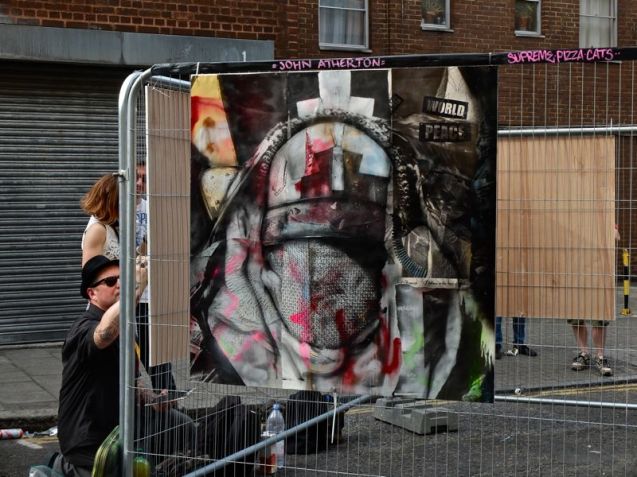 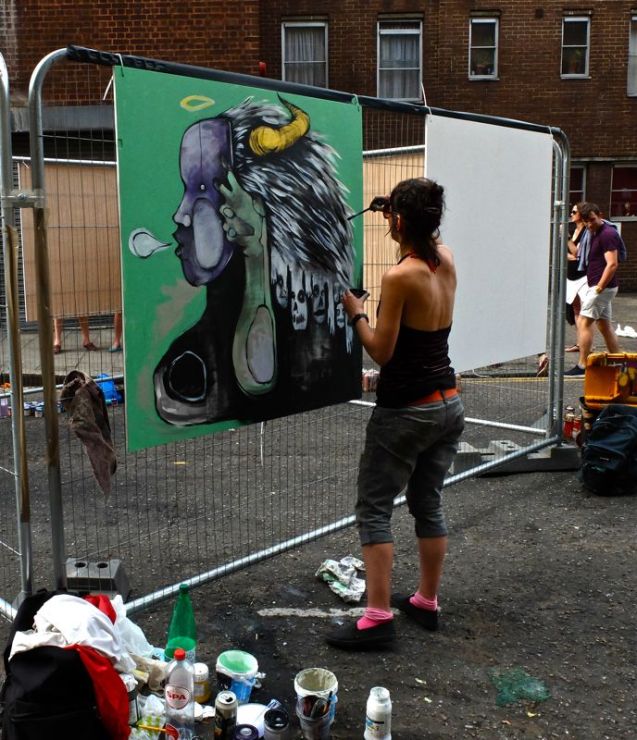 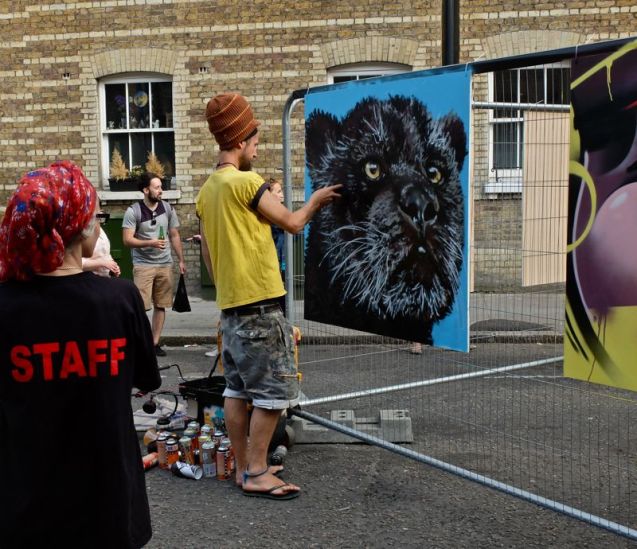 The Krah taking a break with his friends (left) whilst Vinnie Nylon (right) keeps hard at it.

These final paintings are from the third area down at the Barbican end of Whitecross Street.

Komo, from Indonesia, has only been in London a year. He told me this painting represented the anger and pain he’s been experiencing in recent years. He was a very friendly jolly soul though.  We laughed about Komo painting next to Cosmo. 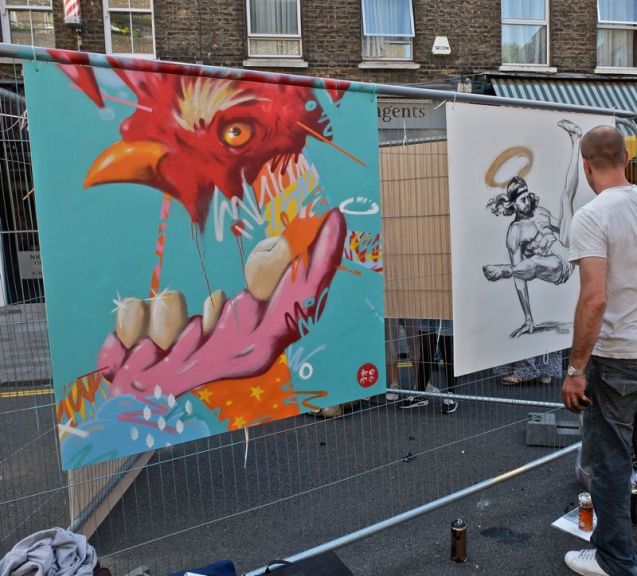 I’ve seen a number of pieces by Cosmo around Brick Lane and all his ideas is classically inspired. So it was fascinating to see how he created this work.

This next piece below was completed by the time I arrived half way through the party.

A Donk paste-up (left). The Real Dill (right) puts the finishing touches to his work.

The Id-iom brothers who painted the kissing couple were having a ball and very happy to chat too.  There’s a lovely texture to the faces which gives a 3D feel to the finished work. 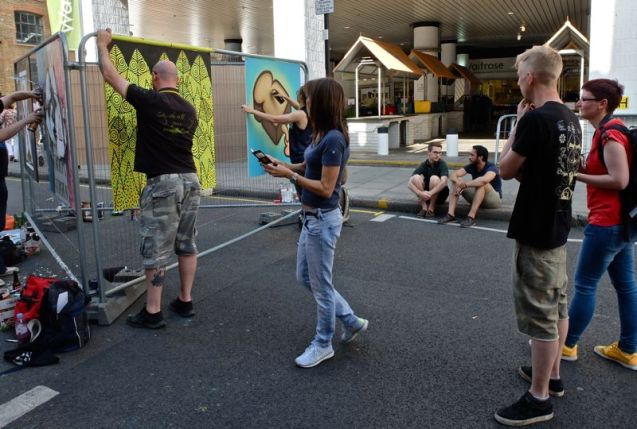 The fans enjoy watching Six1Six (left) and Artista (right) completing their contributions to the event.

As with all my posts on street art, I try to capture the atmosphere rather than only record the work.  There are a great records on London Calling Blog and Inspiring City blogs of most of the completed works.

And please continue with part 2 of this two part post on the Whitecross Street Party 2015 to discover what else there was to enjoy,