Reading is fun isn’t ?  For me it is because I’ve always loved reading. I guess these days with so many visual distractions, it may be harder to promote the enjoyment of reading to children.  So The National Literary Trust have teamed up with Wild in Art to created this summer’s London art hunt project which will end in a charity auction in October. Meanwhile we have until 15th September 2014 to enjoy it.

So what are we looking for? Brightly coloured benches designed in the shape of an open book and painted to celebrate an author and their work.  There are four trails of approximately 10 -15 benches on each one. And this week I followed my 2nd trail, the riverside trail, which takes you along the south side of the river Thames, between Blackfriars and Tower Bridge.

Its the most compact of the four trails because its focus is on books written for children and young people and so their little legs won’t get too tired with lots of walking. You don’t need children or to be a parent to enjoy this trail though because we were all children once and there are benches of old favourites as well as new classics.

It would take you around half hour, or a hour if you want to linger, to find the art works. I covered it over two short visits because the first time I hadn’t got a map with me. The first visit was early evening when the embankment was swarming with tourists and office workers.  I returned early on Saturday morning, around 8.30am to find the benches I’d missed and to see others properly.

One end of this trail begins in front of the new Globe theatre near Southwark Bridge and it is dedicated to London’s most celebrated English playwright, William Shakespeare.  During Shakespeare’s lifetime there were around 8 theatres in London, including The Globe, which performed his plays.

This was one of my early morning shots because I knew it would be occupied later in the day.  I love the guys in the background enjoying their breakfast in the morning sun.

This rear view shot was taken with my phone a week earlier as I was passing. I hope these three people are discussing a good book or play.

If you then head east towards Tower Bridge, after a 5 minute walk you come to a small square by the river. And there are two benches here to celebrate the novel Great Expectations and the character Paddington Bear.  The early morning light was beautiful.  And the air was cool after a heavy night of rain.  The city felt tranquil before the hustle and bustle of a busy summer weekend.

The author of Great Expectations, Charles Dickens is another of London’s most famous writers whose novels are often set around the city.  This square is less than a mile away from Marshelsea road and Little Dorrit park, the area where Little Dorrit, another of Dicken’s novels is set.

This artist Liotchev is from Bulgaria but I think his style looks very French Impressionist.  I’m sure this rear view also looks great at dusk. 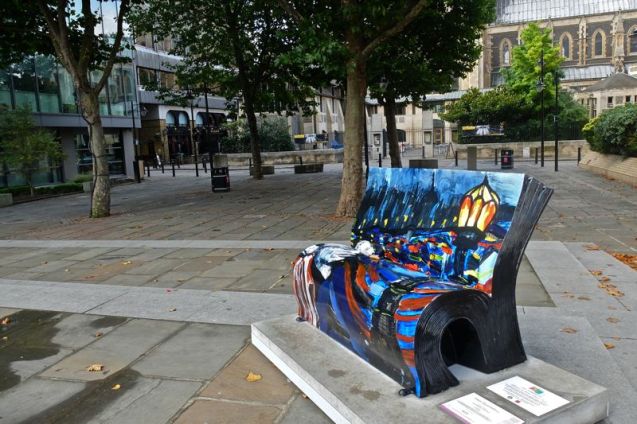 This detail (below) is the face of Abel Magwitch, the convicted felon who is the benefactor of the young hero Pip.  There’s an episode in the novel which is set on the banks of the Thames, so this riverside setting is ideal for this bench.

On the far side of the square is the second bookbench dedicated to the author Michael Bond and his well known character Paddington Bear. He is of course named after one of London’s railway stations, Paddington Station, where the fictional teddy bear was found by the Brown family.

As a Londoner I do find it a little disorientating that Paddington is here by the river in Southwark and not over to the west of the city near Paddington station.  But there are no bookbench trails over there. And this is the children’s book trail.  So it does make sense, sort of. 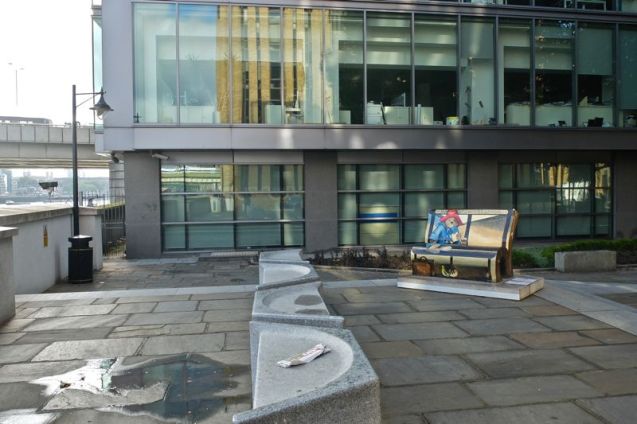 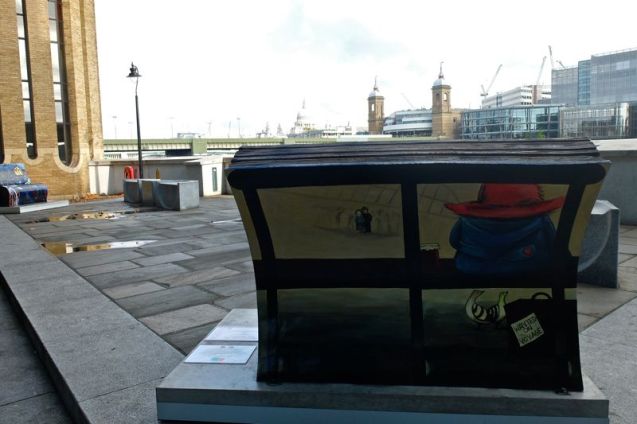 From the Gruffalo to Scarecrows bookbench: artist Axel Scheffler.

Continuing your walk east, you have two choices at London Bridge. You can either climb the stairs up to the bridge, cross over the road and down onto the embankment again.  Or, if you hate stairs, you can walk under the bridge to the road, cross over and re-join the river path further along. Either way, you won’t miss this next bookbench which is about another 5 minutes walk away.

The creator of the Gruffalo books, Julia Donaldson is a Londoner, born in Hampstead.  I didn’t know until researching this blog post that she was inspired by an old Chinese folk tale about a fox and a tiger when writing the first book. In The Gruffalo, the fox becomes a mouse and the tiger becomes a fantasy monster, a Gruffalo which is a lovely scary, made up name.

This was the only bookbench that you could not sit upon.  I couldn’t see why because it looked no more delicate than any of the others.  Possibly as the area was quite narrow it was to prevent too many people congregating there.

The design on the back is of Donaldson and Scheffler’s newest book, The Scarecrow’s Wedding. I love this shot of the young girl reverentially touching the bench as if she is a character in the book.

Continue heading east, passed HMS Belfast and you arrive at the next bookbench dedicated to the Discworld fantasy series by author Terry Pratchett.

I can’t find a London connection to either the author or the novels but Pratchett’s books have sold 80 million copies world wide and are translated into 37 languages.  If you want to promote reading for fun, then these books must be on your list.

The design of the bench is beautiful, particularly the back.  As I passed it on that summer’s evening, a young girl had just had a photo taken by her mother on the bench.

The route then continues along the river front until you come to a sunken amphitheatre.  You can either turn immediately right up into the square before it or pass by and then swing around up into the square as I did.  As you do, you will spot 4 benches all at once.

From the direction of my approach the Clarice Bean bench was the closest.  A middle aged couple were firmly parked on it, smoking.  I took a few snaps and then moved over the photograph the other 3.  I kept wandering around to see if they were going to leave but in the end I gave up.

Lauren Child is both the author and illustrator of this series of books about her heroine Clarice Bean and her chaotic family life. I couldn’t find any obvious London connection but again they are very popular and sound great fun. 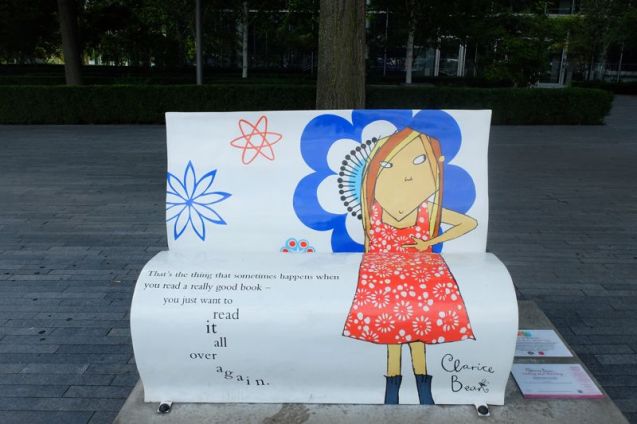 The caption on the back of this bench is “sometimes I stare boredly into space, thinking of utterly nothing.”

It was the occupant and not the bookbench which caught my eye next.  The lady with the picnic basket had draped herself elegantly at the end of the Alice Through the Looking Glass bench. Was she really waiting for a date to have a summer’s picnic with?  Or was she an actor and part of the display?  She looked too perfectly posed on that spot.

When she noticed me taking photographs she donned her sunglasses. She might have felt less visible but she didn’t blend in to the crowds.

I focused on the other benches but when she moved away, it was immediately occupied by another less glamorous couple.  So I’m glad I had a clear view on Saturday morning to enjoy Ralph Steadman’s glorious depiction of the book.

How to Train Your Dragon bookbench: artists Cressida Cowell/Gerard Strong

This series of books and its author were also new to me.  Author and illustrator Cressida Cowell is a Londoner who also spent some of her childhood on a remote Scottish island which inspired her series of books about Hiccup Horrendous Haddock III and his pals who train dragons.  And the books have inspired a series of films, so the characters are no doubt very popular.

The occupants of this bench also showed no signs of leaving.  I loitered for ages and in the end because the design fascinated me, I asked them if they would let me photograph it without them on it.  They took them a moment or two to make sense of my request because they spoke very little English and were oblivious to the fact that the bench was part of an art exhibition.  But they reluctantly stood up and the shot was worth it.

As a child, I loved the books, The Cat in the Hat and Green Eggs and Ham. And it was great to find this bench and to see that it was still so popular today.  The writer is American but the first Cat in the Hat book was created to specifically to make reading exciting for children in the 1950s.  Seuss was given 250 words that first graders needed to know and told to “bring back a book children can’t put down.”  As they say, its a no brainer to include this book on the trail.

The next three photographs were taken in this order and it was like watching a little play unfold before me as this French family enjoyed their day out.  As I arrived they were patiently waiting for another fan to finish videoing it from all angles. As soon as she was done, they sat down for a group picture.  And I love the fact that now you can’t seen the bench at all! 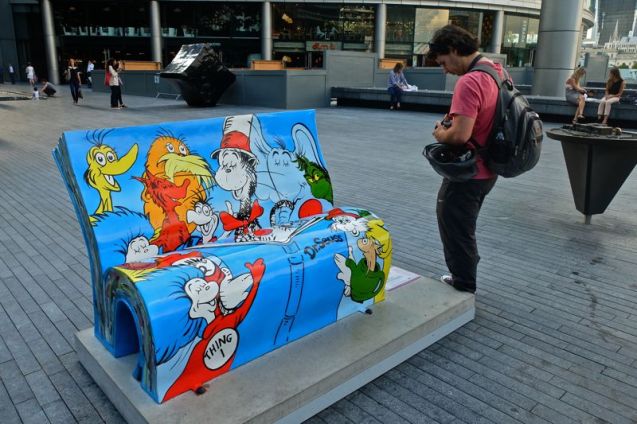 I took this fourth shot on my second visit because I noticed that even the edges of the book were beautifully painted as if there really were other illustrated pages behind the one on the front of the bench.  And it shows the arrival of the first tour group in the background on that Saturday morning. 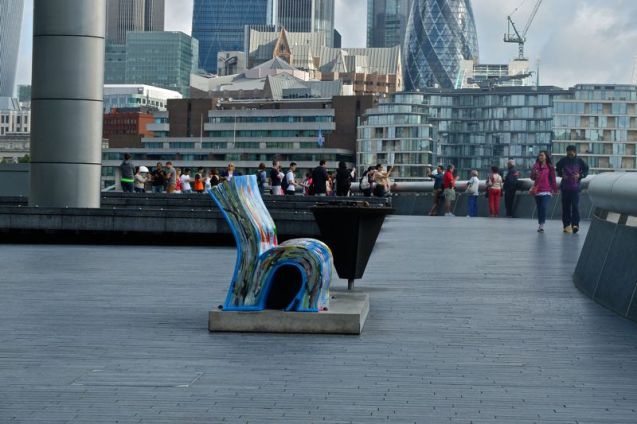 The final book on this riverside trail is set further back from the river in More London square which is on your way past City Hall towards Tooley Street.

The novel War Horse by Michael Morpurgo is another children’s novel about World War 1 and this bookbench is part of the centennial memorials being held in 2014 for that those who died in that horrific war.

As I approached it from Tooley Street and saw it under the trees, I imagined it as being set in the countryside rather than a modern London square.

The Worlds Biggest Flipbook bookbench (not shown on this blog)

As with the Bloomsbury trail which I covered two weeks ago, an extra bench has been added which is in the area but isn’t that close the main trail.  So I haven’t covered it. That bench is in Waterloo Station.

I hope you’ve enjoyed this book trail.  I have two more to cover the City trail and The Greenwich trail.